We do have controversies regarding ‘minis’ with handheld devices like having low resolution and whatnot. When you see or hear ‘mini’, it automatically tells us that the product would be smaller than the previous device and that it will be developed with mere chance of downgrades. My story of the LG G2 Mini does not deviate from this, but my experience gave me a reason to justify that it has efficiently delivered the meaning of ‘G’ in LG.

LG G2 Mini pretty much looks like its older brother, the LG G2 and LG G Pro 2 but of course, its display is smaller. LG developed the mini version of G2 so that people could afford it and let them experience what they are capable of. LG’s penchant for detail and innovation stick on this device.

LG G2 Mini has a 4.7 inch IPS qHD capacitive display with a resolution of 540 x 960. I must say that it isn’t the best resolution around for a phone, but given its screen size and type of LCD, colors really pop out and texts are highly readable.

Just like LG G2 and LG G Pro 2, LG strategically placed the physical buttons at the back of the device (Rear Key). Suprisingly, it is pretty pleasant to hold and use the device although it took time for me to get used to it. It was a bold move for LG to do this, and I’m really impressed that they continued on implementing this functional design on the next LG G-series. The absence of notification light is bearable, but it would have been a lot nicer had they put one just atop its screen. Its back casing is reminiscent of G Pro 2.

Speakers and microUSB port are at the bottom of the device and its design somewhat resembles iPhone 5.

The sound receiver is normally placed beside the front facing camera (1.8 megapixel camera) which is very typical for a smartphone. The earpiece is located just beside its light sensor.

A metallic gray side bezel, which envelopes the device looks very simple and professional. The LG G2 Mini has an 8 megapixel camera. Like the G Pro 2, the G2 Mini also captures stunning photos and videos. The LG G2 Mini can capture photos in low-light conditions albeit quite grainy. Dual SIM fans, rejoice! The device being offered by LG in their stores is the 3G dual SIM version. (Smart is offering an LTE single-SIM flavor of this device.) This feature made things easy for me, thanks to its dual SIM capability. The feature works on both voice and SMS, and LG’s Optimus UI is heavily designed to fully utilize this hardware capability.

As for call quality, the device is HD Voice ready. I tried calling my brother’s LG G Pro 2 (also HD voice ready), and the result was astounding and topnotch. Ultimately, the G2 Mini’s performance is one of a kind. It runs on a 1.2 Ghz Quad Core Processor with Snapdragon 400 with 1 GB of RAM and 8 GB of internal storage. As you can see, the G2 Mini scores a whopping 8850 points using the Quadrant Standard Benchmark, leaving behind the HTC One X and ASUS Transformer Prime TF201. Games like NBA 2k14 and Asphalt 8 are easily played on this device with no lags. For 2 weeks, the G2 Mini never let me experienced lags as expected from a device with a Qualcomm processor. Knock code is also available on this device just like LG G Pro 2 and L7 Dual. The latter is a revolutionary security software module that asks users to enter a customized tapping or knocking pattern on the display, which becomes their own personal code. It works while the screen is off, and even when the windowed-case is put on. The knock feature isn’t perfect though as there are times that the phone doesn’t wake up quickly.

Here’s a simple guide on how to use this feature: 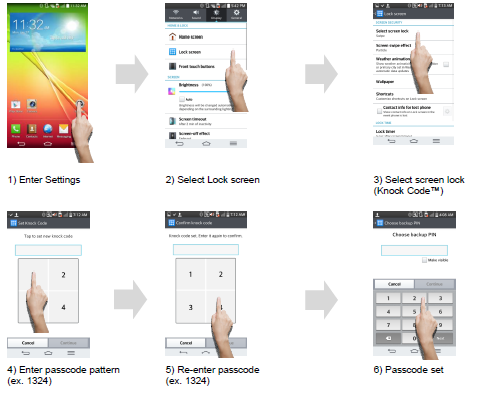 As for battery life, G2 Mini has 2420 mAh, which can last for up to 2 days at regular usage (with Wifi turned on, whole day of text messaging and I even watch Twitch.tv whenever I am bored). Also, the G2 Mini also runs the latest OS from Android, Android 4.4 Kitkat. Visual improvement and LG’s proprietary Optimus UI are also available on this device. Certain LG G2 exclusive software features are available on this device, which truly enriched my overall experience. It really made me feel that I’m using a miniaturized version of last year’s G2.

Knock-code, QSlide and Tap-to-Wake are just some of the few features of G2 that made it to G2 Mini. These are the ones that really make this device very special.

The LG G2 Mini is a living testament of the quote “Small but terrible.” Its hardware is a little bit downgraded compared to its big brother but the device definitely gave me a truly satisfying experience. Most of the innovative features present on its older brother are available, and such features all the more give gadget-scouting eyes a reason to buy this.

NOTE: The LG G2 Mini (LTE) is available and free at Smart in All-In Plan 1200 that comes with Unlimited LTE Surfing.

hi gadget pilipinas.. can you post a text demo on what was the LG dual sim interface? im not familiar with LG dual sim. thnx!

this phone does NOT have a light sensor..