“Is this for real?”. That’s the thought bubble I had when GadgetPilipinas’ very own Gian Viterbo handed me the review unit of Monk Plus. I couldn’t take the request seriously at first because of the sachet packaging. My concern was tempered when GadgetPilipinas’ very own Gian assured me how only a former seminarian can. “Bro”, said Gian as he sensed a bit of hesitation on my part, “it sounds great”. I then straightened the front to read the copy on the packaging: “the biggest bang you’ll ever have for your buck.” Well, let’s see if the Monk Plus can walk the talk.

Usually when reviews are written, price is discussed last. It makes readers (and to a certain extent reviewers) consider the whole value-proposition of the product after getting more information about its performance. For this review, we’re flipping it because Monk asked for it. “Dare to challenge me” says the Monk Plus on its packaging. Challenge accepted then. The earphones cost P350. Now that we know the price, let’s see if it’s got the bang it says it has. 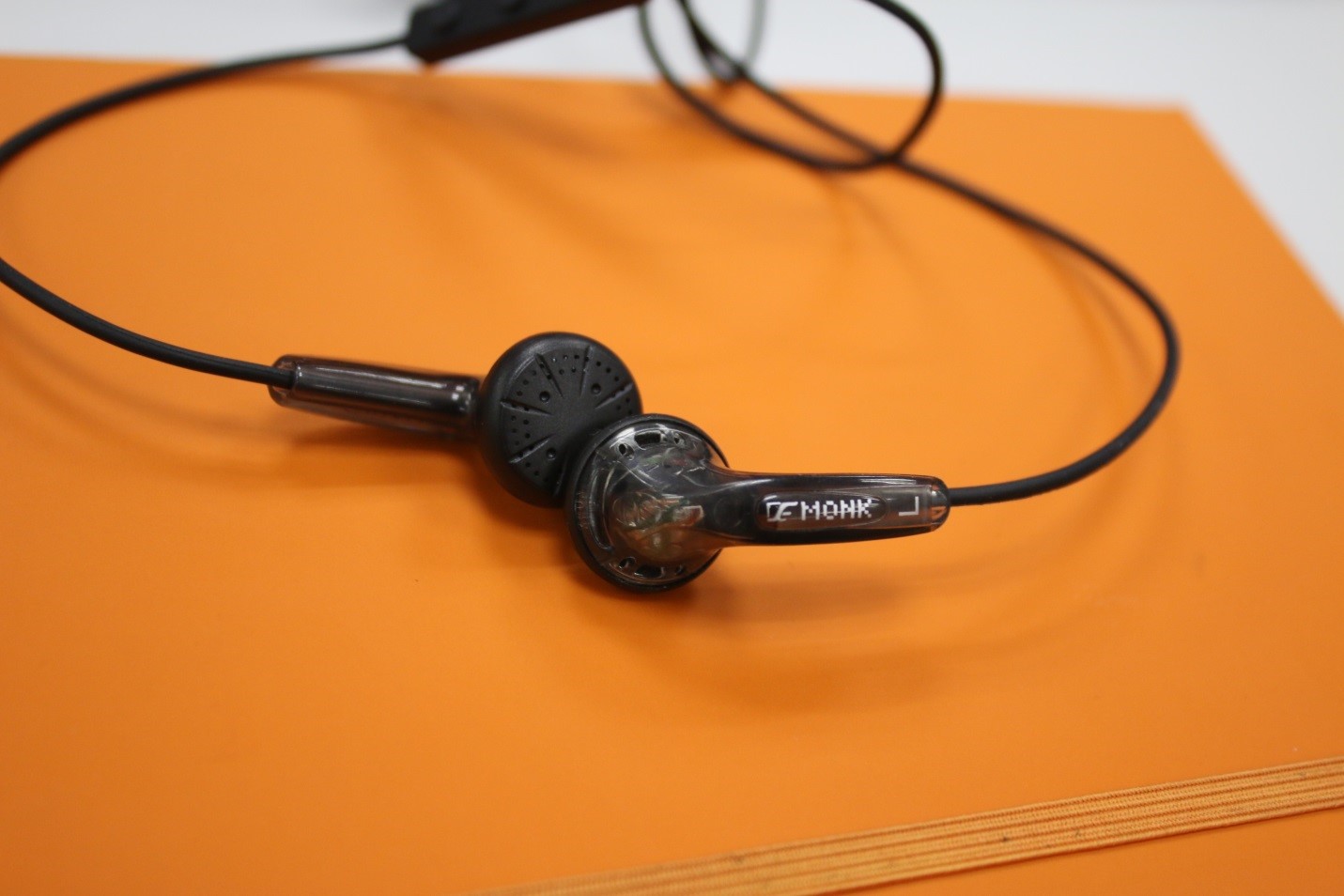 Throwback transparent plastic housing is a plus if that’s your thing.

You can see Monk’s innards with its transparent plastic shell and the Monk brand spelled-out in pixelated typeface. The whole thing gives off a 90s feel to the product which, if you’re into blast-from-the past- see-through plasticky design, is a plus. It comes with 4 pairs (2 pairs of red, 2 pairs of blue) of earphone tips, packaged in a mini ziploc. Monk Plus is plus-sized. It covers more than half the concha (that part of the ear that leads to the ear canal; google it) which is unusually big relative to other earphones in its class. Good if you have big ears. Bad if you have small ears, like mine. The volume buttons on the controls are akin to a lego brick and pressing any of the three buttons give good tactile feedback.

Let’s cut to the chase. The sound is not that different from the bundled earphones you get from an entry-level smartphone. The sound is well-rounded but at the onset, but not enough to really separate it from the pack. There is a bit of improvement on the bass and on vocals.

Could it be that the creators of the Monk wanted to give us 90s era sound quality too to go with its looks? With that assumption, I listened to 90s music (90s rock to be exact).

Pearl Jam’s Even Flow sounded raw. Which could be a good thing if you’re looking for that unbalanced mix of treble and bass. Eddie Vedder’s vocals shines but the bass couldn’t just push through at times. However, there was a bit of oomph to give me an “ahhhh there’s the bang” moment.

After listening to a few more 90s luminaries such as Soundgarden and Nirvana and dialing even back to the 70s with Led Zeppelin, the Monk Plus held its own quite well. Today’s music such as those of DJ Snake, Bruno Mars and EMD classics  also fared well due to Monk Plus’ balanced output.

The fit is a hit or miss affair. I find that the size of the earphones is too big for my ears. I didn’t realize that I had small ears for a guy until I tried the Monk Plus. But just to be sure, I had some of my friends try it. Some are okay with it while others found it a bit too big. Fitting those plush earphone covers made it a lot tighter which made me revert to using it without the covers. Putting these on the Monk Plus may improve the fit but may affect sound quality.

At P350, the Monk’s value is hard to beat and you get what you pay plus a few points for looks and sound quality. If you want to replace your entry-level earphones, go for it. Just temper your expectations since this is not an upgrade but a reasonably priced alternative to the earphones that came with your phone.  It’s important to try it out first though since again the fit is a hit or miss affair (for this reviewer, it’s a big miss).  It will be hard to try this in stores too without a sampler since you’ll have to open the sachet to try it on.  If you already have premium earphones (using apples’ earpods as the benchmark), skip this. However, it’s good value for money. Monk Plus doesn’t take itself too seriously so have fun with it. Having said that, the quality of Monk Plus is on the higher-end amongst entry-level earphones and performs as advertised – the biggest-bang for the buck in its class.

Click this to check out our video review of Ve Monk Plus too, courtesy of our affiliate channel, 3rd World Reviews.