The design is an epitome of the Acer branding – sophisticated with quality. The phone stands out with its futuristic look of the front camera. The screen is smooth and speaks long lasting, and the back is an elegant finish of grays and black.

Acer M330 runs on Windows 10. The body is made out of plastic and the phone’s form conforms to the hand’s natural grip. The device is 9.6 mm thick and weighs 145 grams. It is compact and surprisingly lightweight.

Acer M330 uses a 480 x 854 resolution and it isn’t bad for regular video watching. Users can easily notice the pixels but they don’t prevent them from an average viewing experience. 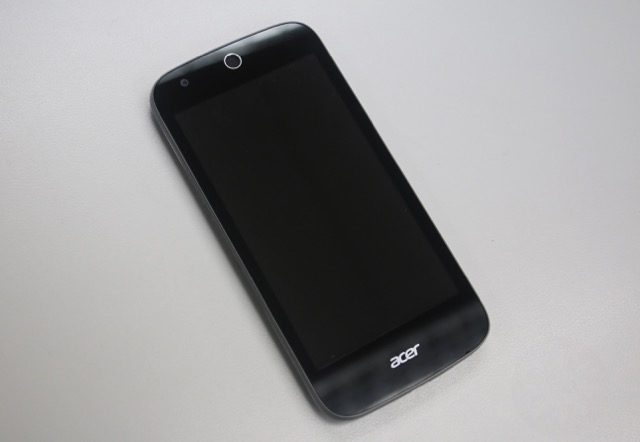 The phone has multi touch, but cannot cater more than two inputs at once. No need to look for a color calibration in the settings, for the colors are already vibrant. Acer M330 packs a 5-megapixel back camera with autofocus, LED flash, 720p recording and a 5-megapixel front camera. The 720p ability is surprising for its cost. It definitely is for the people who take selfies to the next level.

When zoomed in, noise can be obvious. The selling point of the phone is its continuous focus that lets the camera identify new subjects as you tap the screen. I am surprised by the available settings of the phone’s camera. It has both on and off for LED flash, white balance with 4 setting, Camera focus (Auto, Macro, or, ∞) ISO levels from 1000-3200, brightness (-2.0 to +2.0), available lense features you can download on the store, photo timer (2, 5, and 10 seconds), aspect ratios, and built-in digital video stabilization. You read it right, you get free stabilized videos from an affordable smartphone like M330.

I took a video and I thought it looked fair. The audio from the video is clear making this a perfect phone for video as well. Filmmaking enthusiasts will surely love the phone’s mute recording feature which lets users edit the music and videos with ease during the post-process. The video bitrate is at 8.1 Mbps and the audio is at 195 kbps, with 2 channels and audio sample rate at 48 kHz.

How much do you like to play music? If the question sounds too rhetoric, then this phone is for you. The back speaker is loud enough for your shower concerts. The sound doesn’t distort at the maximum levels, and the vocals are clear and audible. For calls and video chats, the front speaker does the job well.

It’s Acer, need I say more? I could still continue on with my games, videos, and social networking activities even when the battery hit low.

The total charging time takes at least two hours. You can go up to 8 hours without going below 80% if on standby mode. Users could expect up to two hours of continuous heavy gaming when used with WiFi and high brightness.

When I used it to play games, I barely felt any warm heat. This is one of the things I like about the phone – it doesn’t get hot when running heavy applications. I personally don’t like the Microsoft store. For some reasons, I find downloading apps a little bit complicated. You can not find every popular apps in the store – total downer. If you want to join the Pokemon bandwagon, windows is not for you.

In terms of texting, I find the phone relatively decent. Although I had struggles during the first week, eventually I got used to it. But I don’t suggest fast typing in this kind of phone because the keyboard is sensitive and prone to corrections.

Signal in the phone is very good. Compared to my other devices, M330 quickly catches signal even in secluded areas. The LTE feature is realiable. I was able to surf uninterrupted. Thumbs up for this Acer!

Windows 10 is a new vision of OS. Acer has been doing very great in its products and it gives a lot of promise to Windows. But for some, you may find this feature a little 90s, especially those who follow behind Internet development.

It is for consumers who would want a longer battery life. They would enjoy the performance and quality of the phone. It offers a solid feature at an affordable price. It is ideal for students and budget-conscious people.

Windows 10 Mobile isn’t much RAM hog. I have that phone and I’m monitoring its RAM when I play Asphalt 8 and it reaches 600MB also running some apps in background such as Messenger. So in Windows Phone world, 1GB RAM is same as 2GB RAM Android device. :) For me the greatest downside of my phone is the battery life. I’ll charge it 2x a day exposing my phone through internet via wi-fi everyday.