Intel’s 7th generation Kaby Lake processors will soon become the trend. And as such, ASUS has now released their newest Motherboards which are capable of harnessing these new processors’ capabilities and giving gamers the best performance possible by incorporating world-leading innovations and ROG-exclusive technologies. Introducing the Maximus IX and Strix Z270 motherboards. As the flagship motherboard, the Maximus IX Extreme has been endowed with the best ROG innovations, and is specifically designed for water-cooling enthusiasts. It comes with the world’s first integrated monoblock (manufactured by Bitspower) which intelligently detects the flow rate of the coolant, inlet and outlet temperatures, as well as leaks. The integration of an M.2 heatsink also provides exceptional heat dissipation to prevent throttling, which results to improved performance and reliability. The Maximus IX Code provides gamers the aesthetic prowess of Aura Sync RGB lighting, on-board Wi-Fi, and reliability across components. ROG Armor has also been incorporated to protect and streamline the board. The Maximus IX Apex is the newest member of the ROG product family, and is aimed at enthusiasts who are geared to reach the apex of gaming and performance.

Equipped with the best overclocking engineering couple with a revolutionary DIMM.2 design. It allows for mounting of two M.2 drives vertically, in a DDR4 interface, thus, giving users the option to install DIMM or case fans to maximize cooling. To top it off, the PCB has been re-designed to an X-Shape to allow Aura Sync to shine through, and it also includes an aircraft-inspired heatsink design as well as a customizable illuminated nameplate. 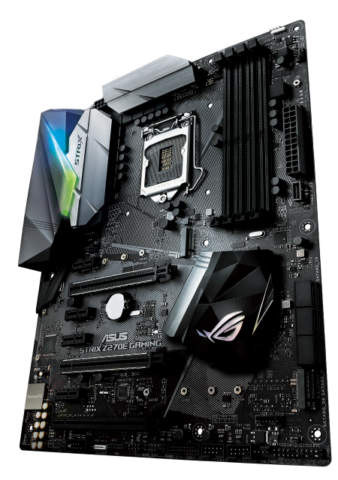 The newest boards to hit the battlefield, ROG Strix boards cater to every type of gamer, from the casual, to the enthusiast:

The ROG Strix Z270I Gaming motherboard in particular, is equipped with a double-decker heatsink design which allows for an M.2 SSD to be mounted on top of the PCH heatsink to maximize board space and improve heat dissipation.

These new ASUS Motherboards are equipped with the latest innovations:

Through a collaboration with RealTek, the latest ROG motherboards have been equipped with exclusive S1220 or S1220A audio codecs which provide a 120dB signal-to-noise ratio on the Stereo line-out and 113dB for the line-in, for capturing high quality audio. It also ensures optimal volume on headphones using a dedicated impedance-sensing circuit.

The Sonic Studio III audio suite now as an intelligent feature which transfers different audio streams to different outputs, allowing gamers to determine who hears what, while the Sonic Radar III audio engine can now process sounds more accurately than ever.

Touted as the world’s first motherboard RGB sync technology, this feature provides nine lighting effects and a brilliant spectrum of colors for illumination across capable hardware and can easily be controlled using a dedicated application.

A lot of users like to customize how their components look. With the new ROG boards, they can now easily install custom nameplates, cable covers, and even a dedicated fan holder which lowers M.2 temperatures by up to 30°C using the dedicated on-board 3D mounts. ASUS has collaborated with Shapeways, the world’s largest 3D-printing service company to launch an online store where you can choose from a full selection of 3D-printable parts.

ROG Strix and Maximus motherboards are equipped with the latest Intel Gigabit Ethernet technology to reduce overhead and deliver high throughput, while LANGuard ensures reliable connections. Electrostatically guarded and surge-protected components with 1.9x better tolerance to static electricity and 2.5x better protection against surges have also been incorporated into the design.

ROG also introduces Areion 10G, the first Ethernet card to make use of the PCIe 3.0 interface. It houses an extra-large and stylish heatsink to ensure stable performance during high-speed transfers, while the GameFirst IV utility ensures lag-free and smooth online gaming by optimizing network traffic.

The new ROG and ROG Strix Z270 boards are equipped with USB 3.1 Type-A ports for blazing transfer speeds of up to 10Gbps and offers backward compatibility. Most models also sport at least 1 USB Type-C port, and Dual M.2, which gives gamers the convenience of a lightning fast 32Gbps PCIe bandwidth.

Though pricing is still to be confirmed, the new ASUS ROG and ROG Strix boards will be available in the Philippines this January 2017. For more information, you may visit the ASUS 200 series microsite.