Just today, March 31, 2015, MyPhone officially launched the MyPhone Rio 2 and MyPhone Rio 2 Lite. The first iteration of these devices have tremendously catapulted the sales of MyPhone in 2014, and this time, the mobile phone company is determined yet again to creatively wow the Filipinos with their new Rio line.

Rio 2 is pitted against many worthy competitors. MyPhone’s existing Android One device, the MyPhone Uno, is still being sold and it seemingly posts a great threat to Rio 2 and Rio 2 Lite despite its being a parallel product of the company. You can check out our review of the MyPhone Uno on this link. And how can anyone who loves smartphones forget the wildly successful SKK Mobile Lynx? Its specs at a very affordable price-point is undeniably its greatest strength, seconded by its impressive optics. And of course, Cherry Mobile’s Flare S3 (and the unconfirmed Flare S4 as of today) are equally impressive products that Rio 2 must topple.

But, MyPhone sees Rio 2 as a different animal. Other than it being marginally better than its predecessor, Rio 2 is positioned to be better packaged, more colorful and innovative than its competitors. Check out our full unboxing video below.

Rio 2’s retail box looks different compared to its previous retail boxes. It doesn’t show MyPhone’s new logo, but the box reflects the new brand theme of MyPhone – #BeCreative. It looks hip, fun, colorful yet maintaining an emotional connection to the brand. The front portion of the box shows how the phone looks like, and at the back you will find essential information about Rio 2 like specs, IMEI and the color of the unit. Other than the Rio 2 (let’s put it aside for now), its retail box contains the following:

The device boasts a 5-inch IPS HD Display with Gorilla Glass 3 screen protection technology. We don’t want to test how tough its display is for now, but we’re looking forward to test it out soon. 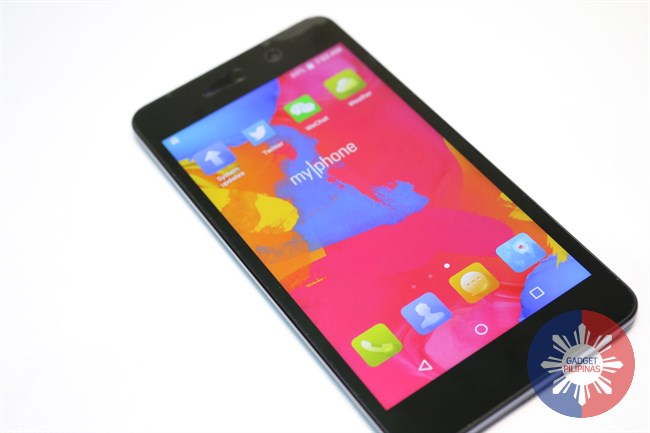 On top of it screen is the earpiece, sensors and its 5-megapixel secondary camera. The phone has soft control keys that’s why you’re not seeing capacitive buttons below the screen.

The Sleep/Wake and Volume keys are located on its right side. The microUSB port and its lone microphone is conveniently located at the bottom of the phone. Meanwhile, its 3.5mm headphone jack is placed just above the phone. Let’s now turn our attention to its back panel. It is smudge and slip free, thanks to its Sandstone Black material and design. This is our first time to ever see a phone (from a local company), which sports such material. The texture and feel of a slightly smooth rock and a felt paper approximate the the texture of Rio 2. Interestingly, Rio 2 Lite also sports the same material and design. The phone employs a minimalist and yet functional design. First, it’s Sandstone Black material is slip and smudge-free; second, its frame is made from Magnesium-Aluminum alloy bracket, which is twice stronger than steel but lighter by 40%. In order to   have its frame intact, Rio 2 does not have a removable battery. That’s something you don’t need to worry about as it has significantly better battery capacity (2800mAh vs 2000 mAh on last year’s Rio); and the pre-installed Android 5.0 Lollipop has implemented battery saving functions.

Rio 2 is huge step forward compared to last year’s Rio. While some of our commenters find its price a tad higher than its competitors, we find it totally justifiable when we finally saw and held it in the flesh.

While MyPhone keeps mum on its SoC, it’s obvious that Rio 2 has a Mediatek MT6582 entry-level chipset. Based on the chipset’s specs sheet, it has an ARM Mali-400. You wouldn’t have any problems with this when it comes to playing games.
Build and Design are Rio 2’s other great strengths. A local branded phone with Magnesium-Aluminum alloy bracket and Sandstone Black material (that some of you may have seen on OnePlus One) seem to be far-off until now.

At PhP5,499, Rio 2 is – in our books – an awesome device and worth purchasing. Of course, if you’re not in a hurry, we would be very happy to take your questions and feature them on our site on our consumer review.

*Update: We were informed by MyPhone that Rio 2’s screen isn’t Gorilla Glass 3. Somebody needs to correct the flyers they gave away during the launch event. This is apparently wrong, according to MyPhone.