Asus’ expertise on motherboard and networking peripherals is topnotch. As one of most sought after routers in the country today, I expected a lot from Asus’ RT-N66U. In this review of the so-called Dark Knight router, I will explore its tons of features and connectivity options that are said to be optimized not just for the casual users but for power users as well.

The device is quite large for a router. For a dual-band (2.5Ghz and 5Ghz) router with LAN & WAN features, USB storage support and enhanced cooling support, its size is definitely acceptable in my books. If you look at its design a little closer, you will notice that it’s designed the way Asus would design their laptops. 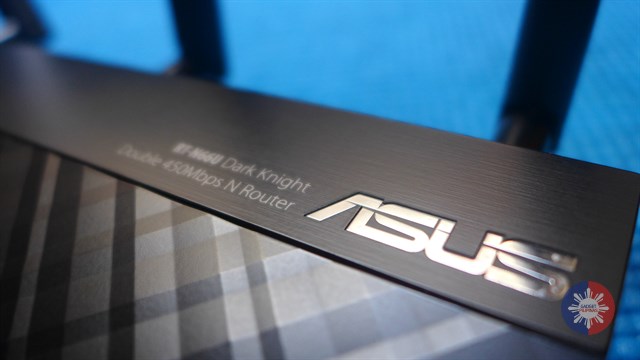 The pattern they used on the top-face of the router is attractive enough even for Louis Vuitton. The brushed black panel, which also bears the Asus brand looks very classy. The router just looks so attractive, that you would want it to sit beside your new Xbox One or other shiny appliances. The three adjustable antennas included in the package match the design of the device, but its an unavoidable inclusion because of function. Asus did a good job in using blue LED light on this router. I thought that it perfectly matches its overall design. As seen above, all features and functions have LED lights to notify you which feature is turned on or currently being used. Even the included power adapter looks very attractive too! The ports and sockets can be found at the back of the router. You can easily judge how full-featured this router is just by looking at its back panel. You will find the following at the back: I constantly reminded myself just after unboxing the device that it isn’t an additional decoration on my sala. It is, obviously and primarily (haha!), a router, which would allow me to share my internet connection to multiple devices.

Setting up this seemingly complicated device was surprisingly easy! I just hooked up my dsl connection at the back of the device, fired up the router, connected to it and went through its QIS (quick installation setup). It’s a plug-and-play device, and that’ll give a big sigh of relief to you not-too-techie readers out there. The router has 2 frequencies (2.5Ghz and 5Ghz) so you will have to go through the process of naming and setting up these 2 frequencies. Bear in mind that this router allows simultaneous dual band connection. This means that you have the liberty to connect to either one of the 2 frequencies. Tip: limit the connection of your devices that are not compatible to Wireless-N to 2.4Ghz so it won’t affect any Wireless-N capable devices connected to 5Ghz. What if my device doesn’t not support 5Ghz Wireless-N 450mbps?

If your device does not support 5Ghz Wireless-N, get yourself an Asus USB-N66. This adapter supports MIMO and can provide up to 450Mbps high-speed transmission for smooth video streaming and high-performance networking. This will work very well with RT-N66U.

But, if you don’t want to buy an additional peripheral, you may settled with just using the 2.5Ghz frequency.

Perfect for Gamers and Media Consumers

Let me jump from being too technical to just being practical this time.

This router is perfect for gamers! While playing DayZ on my desktop PC, I was not kicked out of the game due to high ping unlike before. I usually get around 400-500 ping while playing the game using a Dlink router. On Asus RT-N66U Wireless N900 router, I was only getting an average of 30-55.

The router can even be optimized for Xbox 360! I was not able to test this though as I already sold my console 3 weeks ago. Bummer.

The device also supports up to 2 USB ports, which can be used to connect media storage devices and printers. This is very useful if you wish to share files or printer/s within your home or office network.

3G/4G usb sticks may also be inserted and used on the device. There’s extra stuff to do to fully setup the latter. Check out the tutorial (text tutorial here) below for more information. Unfortunately though, the device does not support USB 3.0 for faster transfer rate, so that’s quite a bit of a letdown.

The router supports several operation modes to meet different network requirements. Wireless router mode, which is the default mode is the most common setup. This can also be used a repeater, which makes the router wirelessly connect it to an existing network to extend the wireless coverage. It can also be used as an Access Point, which just basically extends your existing connection using ethernet connection. Take a look at the illustrations below to see the differences of the modes.

Feeling generous? The router has a feature, which allows you to share your internet connection to guests. You can assign separate SSIDs for both 2.5Ghz and 5Ghz guest networks. This is perfect if you want to share but limit the connectivity time of your house helpers. I found this feature very useful as I allow my kids’ yayas to access the internet every night. The Asus RT-N66U Dual-Band Wireless-N900 is best router I’ve used so far. The quality of connection now (using my dated router) is significantly poor compared to the quality while using Asus’ Dark Knight router. As an occasional gamer and media consumer, the router is definitely a must-have for me. I’ve got relatively good PLDT connection at home, and I believe that the best way to use it at its optimized quality and speed to have a router such as the RT-N66U.

Its price, which is PhP9,888, would be an issue for some. If you’re just into visiting social networking sites and occasionally downloading files, you will under-utilize the RT-N66U. Look for other less pricey ones from Asus like RT-N56U Dual-Band Wireless N600 Gigabit Router or the RT-N12 C1 Wireless-N300 Router.