Last July 24, HP announced 3 new Slate devices that will definitely shake mobile and creative landscape in the Philippines. The line-up, which is composed of 2 Slates and an All-in-One Desktop (also part of the Slate series), are all powered by Android Jellybean. 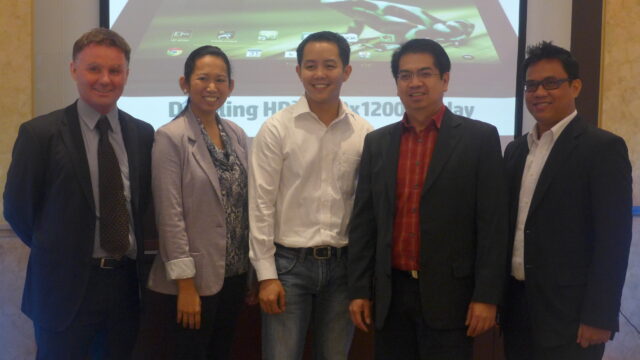 Powered by Android Jellybean 4.1, the HP Slate 7 is the most compact and the most affordable among the 3 products that HP launched. It is running on Dual Core 1.6Ghz ARM processor (ARM A9 Dual Core 1.6Ghz), 1GB of RAM and 8GB internal memory. Yes, it isn’t really supercharged compared to other 7-inch tabs out there. But, it can definitely handle or even execute your favorite 3-D games and memory-heavy applications, albeit rather quite slowly compared to the 1st Gen Nexus 7. It’s 7″ wide view angle LCD capacitive screen has a resolution of 1024 x 600. You can also take photos and videos with its 3mp rear and VGA front facing cameras. And of course, it has Beats Audio™ with stereo speakers 3.5mm headphone-out/microphone-in combo – it’s most celebrated premium feature. It is also, in my opinion, the most aesthetically pleasing among the 3 devices because of its sleek metallic design with polished stainless steel edge accents. It is available in red and silver, perfect for chic professionals who are looking for Android tablets. Perhaps, the most noteworthy information about HP Slate 7 is its retail price as it only costs PhP7,990. At such price, the HP Slate 7 is one of the most affordable branded tablets around.

Check out the video below:

The Slate 10 X2 is like the Android variant of the X2 line. It has a 2-in-design, which allows you to use it as a tablet or a notebook. With its design – similar with Asus Pad Infinity sans the phone – you can easily switch from tablet to notebook in a jiffy by simply attaching the tablet to the magnetic hinge of the keyboard dock. The latter, by the way, has a battery that acts as a power extension of the tablet. Powered by Android 4.2, the Slate 10 2x has a vast software ecosystem, thanks to the applications available at Play Store. It also comes pre-installed with Kingsoft Office, which enables you to edit your Word, Excel or Powerpoint files on the fly. Unlike the Split X2 and Envy X2, the Slatebook X2 is assembled with a Nvidia Tegra 4 processor with quad core 1.8Ghz CPU and 2GB ram. You can also enjoy your games and media – saved on its 16gb, expandable up to 64gb – on its stunning full HD Diagonal LED-backlit Touchscreen with 1920×1200 resolution. You can also take photos and videos – full HD using its rear camera; 720p using its front camera. And of course, it also Beats Audio™ with stereo speakers 3.5mm headphone-out/microphone-in combo. The Slatebook X2 is available for only PhP25,990 in your choice of Snow White or Smoke Silver.

This is HP’s response to the thriving demand of Android as a creative workstation. To complete the desktop feel, HP packaged this Android device with a keyboard and mouse. Installed with Android 4.2, the HP Slate 21 ticks impressively because of its Nvidia Tegra 4 processor with quad core 1.9Ghz CPU and 1GB ram. It has an 8gb internal memory, which you can effectively increase by putting in a MicroSD card up to 64gb. At such specs, this device is perfect for playing games – ditch the racing games please, it just wouldn’t work well as the device doesn’t have an accelerometer and gyroscope. The 21-inch touchscreen is IPS, but due to it humongous size, the pixels-per-inch falls short at probably less than 110 (ppi) – slighty defeating the purpose of making it a creative/content workstations especially if users are into media editing, photography and arts. The device can also connect with your existing devices and mirror your Windows/Mac OS through its pre-installed (free) Splashtop 2. The said app is sold at the Play Store for more than PhP380.00. This device is quite affordable though at PhP19,990.

The price of Slate 7 is definitely a shocker… in a very positive sense. It gained a lot of positive reactions from my Twitter followers actually. I mostly got reactions like “wow”, “that’s nice” and “not bad”. I’m hoping to be able to test this device soon.

The 21inch AIO is quite different. I’ve got high hopes with the device, but I honestly think that it would be best for HP to offer this device with more accessories for productivity. Filipinos may not be ready for a 21-inch Android desktop, but some may find it really interesting.

Slatebook X2is kinda cool as well. HP could have at least priced it much lower because its competitor, Asus Infinity Pad, is priced just a few notches higher.