The HTC U Ultra is one of the company’s latest handsets in the high-end segment. It sports an all new design language, and boasts a spec sheet that is mostly what you would expect from a device at this category. HTC has done away with their classic all metal design. and has now opted for a more eye-catching glass+metal construction. Their so-called “Liquid Surface” treatment makes it even more of a visual treat, which I like.

There’s nothing that unusual about the other elements of the design, except that now, someone thought, “Maybe we’ll sell well without a headphone jack.” so they didn’t include one.

Now i’m for innovation and moving with the times, but personally, i’m not so sure about this move. I just can’t think of an alternative that could match the convenience of having the headphone jack, without compromising sound quality.

Another thing is the protruding camera at the back of the device. Not only does it destroy what would’ve been a seamless design, but it also makes the rear panel uneven. This means the phone won’t be able to lay flat on the ground, which can cause some issues when playing games that require you to consistently tap portions of the screen.

U Ultra also has a secondary screen much like the LG V10 and V20, used mainly for notifications, media, and contacts. It’s actually quite a good idea, so long as more and more apps can take advantage of it. The U Ultra has a 5.7-inch QHD display. That means almost any type of content should look better and more eye candy in general. We’ll have to see how it affects battery life though.

The U Ultra is powered by a Qualcomm Snapdragon 821 processor, which is still very relevant, but is bound to get left behind when manufacturers start to shift into using the newer Snapdragon 835. I guess it’s just a matter of whether you can live with that or not.

There’s 4GB of RAM which is more than enough for multi-tasking and 64GB of internal storage expandable via MicroSD card. 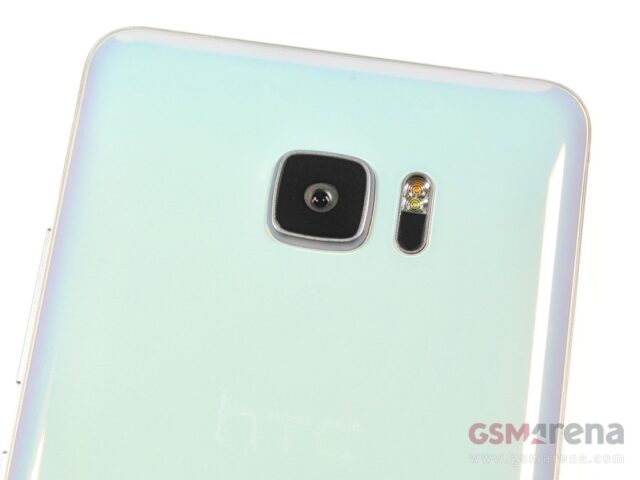 As most of us have learned by now, a higher MP count doesn’t always equate to better photos. The Ultra in particular has a 12MP camera with an aperture of f/1.8 and OIS, so we can probably expect that it would be more suited for low light shots. There’s also a 16MP front camera, which more or less translates to decent selfies. At first glance, a 3000mAh battery may be deemed too small for a phone of that has a 2K screen display and such a powerful processor, but we’ll have to run a dedicated test to see how long it could last.

The HTC U Ultra is shaping up to be a great device and a stepping stone for the company’s return to the Philippines. The new design looks eye candy, and the internals are precisely what you expect from a flagship.

The missing headphone jack may annoy a bunch of people, but who knows? maybe HTC made the right choice. Apart from that, there’s just one more thing that it needs to set a foothold: A proper price.

Is this the Samsung Galaxy C10?