One of the 2 new phones that Torque launched, Droidz Motion, has finally reached Gadget Pilipinas. Torque has been very active in announcing and launching new phones lately, and we’re quite amazed with the glaring improvement of their marketing strategy and positioning. 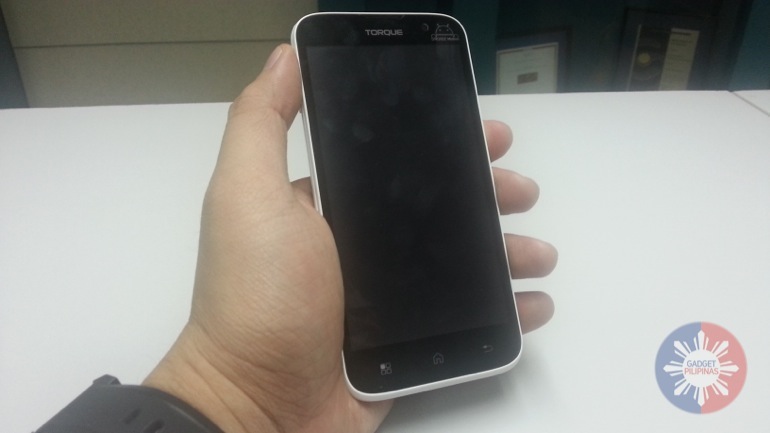 The phone looks simple yet elegant. I personally like its glossy back panel despite being fingerprint magnet. The screen has 3 well lit and responsive capacitive buttons. Its minimalist vibe is pretty but marred by its quite disappointing heft.

The volume rockers can be seen on the left side of the phone, while the 3.5mm headphone jack, micro-USB port and sleep/wake button are neatly placed on the top side. The unit that’s provided to us for review makes a clunking sound whenever I press the 2 sides of the phone. Torque Droidz Motion is an Android-powered (Jellybean 4.2.1) device with 5″ qHD IPS Display. Judging from the quality of pictures, texts and videos on Motion’s screen, I can personally attest that it’s an IPS display. Colors naturally pop-up and the application icons seeming float on the device’s screen. The screen can register up to 5 multitouch points. At the heart of Droidz Motion lies a 1.2Ghz quad-core MediaTek6589 SoC. This is the same SoC you can find on the Cherry Mobile Cosmos X and X2. This ultimately compensates for the relatively disappointing RAM of the phone – 512 mb. During our initial tests though, though its RAM is only clocks at 512mb, it is able to handle some memory demanding games such as NBA 2K13 and Asphalt 8. I still have yet to test the other features and capabilities of this phone especially battery and camera. I’m positive that its 2,200 mAh battery is just enough for casual users to have this phone up and running within the day. I’m still skeptical if the phone’s non-BSI 8mp rear-facing camera can produce money shots and blog-worthy pictures. The same goes for its non-BSI VGA front-facing camera. But perhaps, the greatest clincher is its PhP7,999 price tag. Its price is quite high for a device with a 512mb RAM. Performance wise, Droidz Motion can still deliver despite its mediocre RAM; but such is still an unacceptable reason for most pragmatic cellphone buyers, especially now that there are lots “fishes” with similar “breed” under the ocean.

Nevertheless, I tried looking for  reasons why Torque needed to put Motion’s price to beyond the generally “pragmatic” pricing level. These reasons may also be the phones’ differentiating/redeeming factors or features, or to put it simply – the answers to the question “Why would I even buy this phone at that price?”