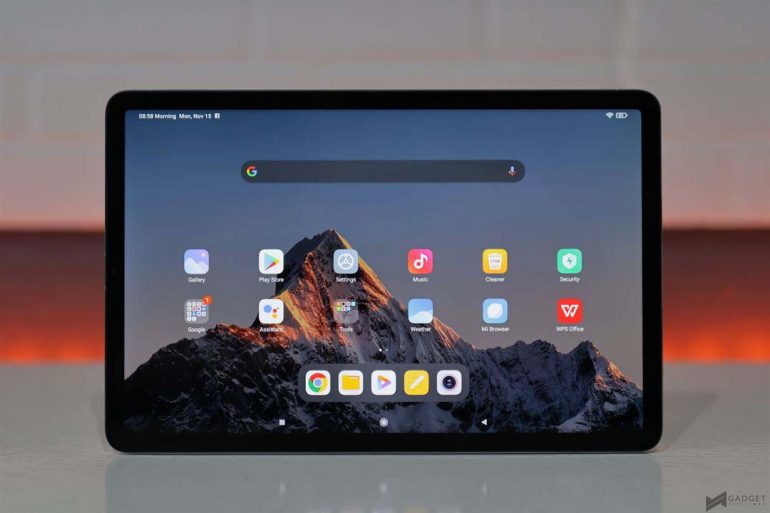 Sometimes, watching a movie, browsing websites, or even playing a game on a phone can feel underwhelming not because of the performance, but due to the display. A laptop? you get a bigger screen, but the keyboard is there regardless if you need it or not. There are times when you just need a device that can be stored away easily when you feel sleepy, lying in your bed.

Thankfully, tablets are here to save the day, and the Xiaomi Pad 5 seems to be pretty good at it.

Premium would be the best way to describe the Xiaomi Pad 5’s look and build. You get a flat design with metal sides, and the back panel’s matte surface feels grippy and makes the device less prone to fingerprints and smudges. The camera bump isn’t as invasive, and blends well with the rest of the panel.

If used in landscape, the volume rocker will be up top, while the power button will be on the left side, allowing for easy access. You get four speakers complimented by Dolby Atmos support, a USB-C port, and two microphones. There is headphone jack, which means either of two things – a dongle or Bluetooth.

One of the most impressive things about the Xiaomi Pad 5 is its 11-inch display, which has a resolution of 1600 x 2560 pixels or WQHD+. Add a 120Hz refresh rate to the mix, and you get a screen that not only boasts great image quality, but can also deliver smoother and more fluid visuals compared to a standard 60Hz display.

The bezels that surround the display aren’t the thinnest in the world, but they do offer space so I can hold the tablet properly without compromising the viewing experience.

At the helm is a Qualcomm Snapdragon 860, backed by 6GB of LPDDR4X RAM and up to 256GB of UFS 3.1 storage. There is no provision for a microSD card, so you’ll have to choose carefully.

As such, the device breezes through day to day tasks, and as far as gaming performance is concerned, this can easily play most popular titles at or close to their highest settings.

The 13MP rear camera is capable of shooting up to 4K 30fps videos, and can also capture stills with good amounts of detail and sharpness. The 8MP front camera offers decent quality for video calling.

Apart from running smooth and snappy, MIUI 12, at least on this tablet, does not come with a ton of pre-installed apps that you don’t need, nor does it throw random notifications and promotional materials at you.

One of its notable features is Floating Windows, which literally lets you open an app in a small floating window that you can move around while using another app. It means you can track Facebook updates while browsing a website. Not all apps are compatible with this feature, and there seems to be no way to resize the floating window.

You can even minimize an app to the side, ready for quick viewing anytime. To maximize the Xiaomi Pad 5’s screen, you can also view two apps side by side in split screen mode.

Then there’s Game Booster, which can be accessed both from the settings menu and in-game. Apart from adjusting settings for game performance, it also lets you add some visual flair to your game with what are essentially, filters. It even features a voice changer.

Our review unit came with the Xiaomi Smart Pen, which is a great partner for the Xiaomi Pad 5, allowing you to draw and write precisely and in a more natural feel with 4096-levls of pressure sensitivity.

It only weighs 12.2g and features two dedicated buttons – one for instantly opening the Notes app, and the other for taking a screenshot. You can recharge the pen by placing it on top of the tablet (in landscape), with a full charge delivering 8 hours of non-stop use. It also takes 18 minutes to fully charge the pen, with a 60-second charge giving you 20 minutes of use.

The speakers on the Xiaomi Pad 5 are some of the better ones out there, offering excellent clarity and decent volume without distortion at high volume, making that movie watching experience more immersive. You also get Dolby Atmos support, to the benefit of certain apps.

There is one area that a lot of tablets shine – battery life, and the Xiaomi Pad 5 is no exception, scoring an impressive 13 hours and 37 minutes on PCMark’s Work 3.0 benchmark with 120Hz refresh rate on all the time.

With a showcase of great performance, long battery life, and even capable cameras, the Xiaomi Pad 5 cements its position as a device that offers more than its already very competitive price tag. It is not free from quirks, as some elements of the software could’ve been implemented better, but I’d say the the pros outweigh the cons on this one.

Get the Xiaomi Pad 5 via Lazada.