Last October, Cherry Mobile has announced a new line of Flare flagship devices. And the Flare S6 is marketed for those on a budget who want to get the most out of what they’re paying. Is this the budget phone worth getting this holiday season? Let’s find out.

Cherry Mobile has claimed to have sold 300,000 units of the Flare S6 last month. That led the company to celebrate by releasing a limited red version, which is the review unit we got our hands on. From the looks of it, the red version does feel premium and there’s a slight heaviness to it that makes it much more confident to hold. The front panel is equipped with an 8MP selfie camera, phone receiver, and the 5.2-inch display, coupled with the non-illuminating capacitive keys at the bottom. These are all covered with a 2.5D glass that has a pre-installed a screen guard on top of it. The right side of the device houses the volume rocker and the power/lock button, while the left side is devoid of any buttons. And placed at the bottom are the USB Type-C port and speaker grilles for audio and calls. 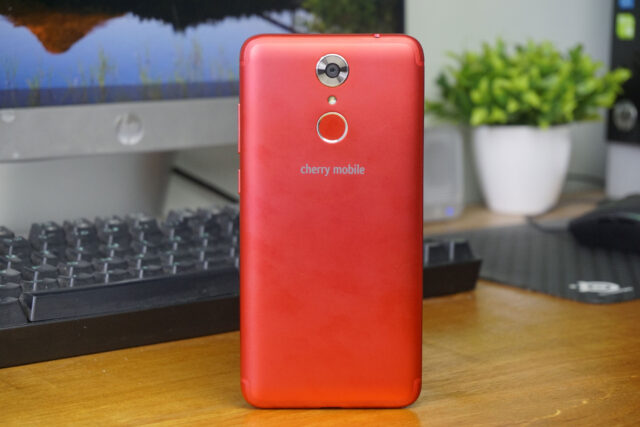 At its back, we have the 13-megapixel rear camera that protrudes by a centimeter from the back casing.There’s also the accompanying LED Flash, the Cherry Mobile logo, a fingerprint scanner, and two patterned, embossed lines at the top and bottom parts which shouldn’t hamper signal reception so we think that this is just a design to make it look more premium. All of these are placed in a gorgeous looking matte polycarbonate back cover. Once you remove the unibody shell, two micro SIM cards and a dedicated microSD card slot are available. Thankfully, the battery’s removable. That means you can replace it when you need to.

The weight of the phone is a bit heavy compared to other phones. But the Flare S6 is a beautiful looking device. It’s pretty and ergonomic. It’s definitely a phone you can confidently hold and operate.

The Flare S6 has a 5.2-inch IPS LCD display with an HD resolution and a 16:9 aspect ratio, giving it a 282 pixel-per-inch density. Its brightness is good and the screen is still readable especially when viewed outdoors. The display also produces vibrant colors with decent contrast. Sound quality is decent. The lows and highs doesn’t crack up when the music is set to the highest volume. When using earbuds and headphones, the audio quality is still good with no issues whatsoever.

When it comes to camera performance, the Flare S6 does show its capabilities. A customized camera app provides options for different modes including portrait mode, beauty mode, expert mode, real-time filters and time-lapse effects. The 13-megapixel rear camera produces photos with good colors and decent contrast and sharpness, although low-light scenarios are far from perfect. The camera often has difficulty focusing when it shoots in low light, and its expert mode only offers controls for ISO and exposure. The 13-megapixel front camera, on the other hand, is decent for quick selfies but isn’t as good as the quality of the rear one. Here are some sample images: Videos have also the same overall quality albeit not as sharp as the camera shots in some situations. Videos can only be shot in 720p at 30fps though.

Cherry Mobile introduces its first UI called the Cherry OS. It still the looks and feels like stock Android but with added customizations. Some features included in Cherry OS are the app management system, speed your phone up with freezing seldom-used apps, clone messaging, and more. As for pre-installed app goes, there are a significant number installed here. But most can be disabled or uninstalled. As usual, they include Cherry Mobile’s own homebrew apps including Cherry Fun Club, CPlay, MovieClub+, and Info Center. Installed system apps include Privacy System, App Cleaner, Health Guard, a plethora of Google apps, and others such as 360 Security and Uber. Those add up for 695MB of storage and leaves only less than 8GB out of the 16GB available for the user to install additional apps and for files.

With 2GB RAM and a 1.3GHz quad-core chip, the Flare S6 is capable enough to multitask, especially with the help of its app management system. It’s able to freeze apps in the background and focus its resources more to apps that are often used. We haven’t had any issues of consistent stutter and lag that breaks the experience so far. As for gaming, the device can play casual games such as Temple Run decently without any stutters. Medium to intensive titles such as Arena of Valor and Asphalt 8 definitely suffers from low frame-rates. Just lower the graphics settings of these games and you’ll have a better game-play experience.
Here are the benchmarks results: The Flare S6 comes with basic features like 4G LTE, WiFi, Bluetooth, GPS, and dual-SIM. As expected, Cherry Mobile has been putting the USB Type-C port in its budget phones for some time now, which is very beneficial for fast data transfers. And the the majority of the competition haven’t completely followed suit yet at this price point. So far, we didn’t experience any issues with its GPS, mobile data, and call quality as long as we’re in an area with good signal. The Flare S6 has 2,600mAh battery. In the PCMark test, we’re getting around 6 hours and 36 minutes of usage from it. That’s not bad considering the size of the battery. It also helps when you also have a battery management system that lets you choose between three sets of modes that could further extend your phone’s juice. Battery charging is pretty fast as well. We had around an hour or more of charging from 18% to 100%. At a price of Php 3,999, you couldn’t find any phone that could offer the same specs and features that this phone has. A removable battery, a USB Type-C port, and a fingerprint scanner are just but a few of the many good features that you can get from the Flare S6. It’s not without its faults though. We still have the issue of bloatware and below average camera performance in low-light. But these and some minor issues doesn’t take away from the whole experience of having this phone, especially at this price point. It’s definitely a great budget phone from Cherry Mobile that sets a new bar for its competitors for many months to come. If you are looking for a budget phone to buy or give this holiday season, then look no further. We highly recommend this phone.