A lot of games often require precision, whether in movement, in aiming, or picking out the target when casting a skill. This is where a proper gaming mouse comes in, and ASUS is one of the most popular brands when it comes to making these devices.

The ROG Gladius II Gaming Mouse is a testament of the brand’s commitment to quality, performance, and style from its Mayan-inspired design to the RGB lighting effects. But what does it offer beyond having a light show? Let’s find out in this full review. 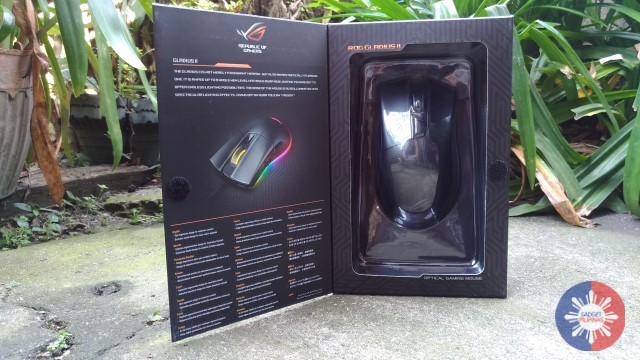 One look at the box of the Gladius II would tell you that there’s something quite special inside. Just like the one that comes with the Strix Impact, the box can be opened like a notebook to view the contents and an overview. And it does come with a lot of extras. You get a carrying pouch, two MicroUSB cables, and a pair of Japanese-made Omron switches, which is a nice thing to have. Of course, there’s also the usual documentation. The Gladius II sports the Mayan-inspired design with maze-like lines on its rubber grips on both sides which add to the overall level of comfort when using the device. It does have a good amount of weight as well, not too heavy, but not too light either. i didn’t have any problems with handling, but people with small hands may find it a little cumbersome to get a good grip. This mouse is designed for right-handed use, most likely due to the placement of the buttons on the side, so left-handed folks may have to opt for the ROG Strix Impact instead. The cable feels sturdy and is detachable, which makes it easier to store the device away when travelling. The scroll wheel is more loose and is less noisy compared to the Sica mouse, which is a good thing. 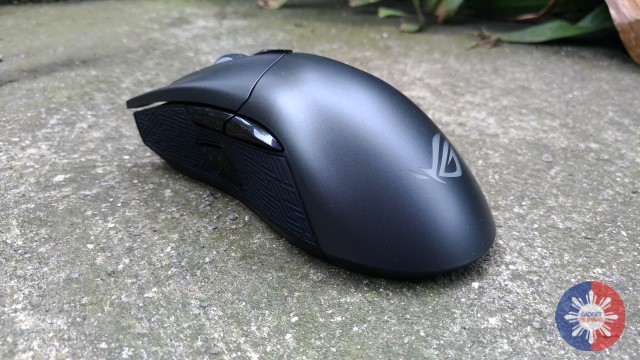 There are three buttons on the left side of the device, two for navigating web pages by default, and the other is the Instant DPI target button, which gives you a burst of either a high or low DPI setting only when its pressed. There’s also a dedicated 2-Phase DPI switch button up top. With RGB becoming a trend, the Gladius II also features ASUS’s AURA RGB Lighting on the scroll wheel, the ROG logo, and the bottom section, all with customizable effects. There’s also Aura Sync, which lets you synchronize the lighting with other ROG peripherals using the Armoury software, which we will talk about later.

The buttons on the Gladius II are fitted with Omron switches with a rated lifespan of 50 million clicks, which should be more than enough even for the trigger happy ones. Its also equipped with a 12,000 DPI sensor, making it ideal for games that demand the highest level of precision.

I tested the Gladius II on DOTA 2 and Overwatch to see how it would perform in different types of games (though ASUS says this is primarily made for FPS). DOTA 2 requires a lot of precision when targeting with skills, or moving to a specific portion of the map, even when choosing which items to buy. The Gladius II performed admirably throughout all the games I played. The balanced handling and the sheer responsiveness of the buttons really helped in preventing excessive movements, as well as quickly executing plays. This thing was even better in Overwatch, as the DPI Target button proved very useful especially when playing as a sniper. It was also helpful in situations wherein I was shooting an enemy that was really close and was moving abruptly. Being able to instantly switch from a low to a high DPI helped me in aiming more effectively. Compared to the old mouse I was using, I also rarely had to lift the Gladius II when moving.

Easy to Use Software As with the Strix Impact, the Gladius II can also be configured using the Armoury software. You can change almost everything from the lighting effects, individual button functions, DPI settings, polling rate (which is the frequency at which the mouse talks to the computer to reflect its movements), and even how responsive the buttons will be. You can also create profiles to change the lighting effect by pressing two buttons at the same time. And lastly, you can synchronize the lighting effects with other ROG peripherals. What I especially like about it is that you can change the effect independently for the different parts that are illuminated. This means that you can set a breathing effect on you click wheel, have the ROG logo on Static, and set the bottom to color cycling. It isn’t without glitches however, as I did experience a bug wherein the effects i set didn’t reflect on the mouse, and there’s even a time when the settings page went completely blank, and I had to close and restart the software. Hopefully this is something that can be addressed by an update.

The ROG Gladius II is an extremely capable gaming mouse that’s not only eye candy due to its overall design as well as the RGB lighting effects, its also well balanced in terms of handling, and is very comfortable to use in just about any type of game. The DPI Target button is also a useful feature which helps you land that important shot with high precision when needed.

Then there’s the amount of customization that it offers. Being able to make adjustmensts to just about any aspect of the device is a big plus, and being to sync the lighting effect with other peripherals add more personality to your setup apart from the visual zing.

It isn’t all rainbows, as the software does have some annoying bugs, but hopefully, those can be fixed by an update.

I would definitely recommend it to anyone who is looking for a good looking, functional, and feature packed gaming mouse, all for a reasonable price (PhP3,890).