Moto is known for coming out with some amazing smartphones such as the Moto X and Moto G. Now, the company has made its comeback into the battlefield with an avalanche of new devices. And boy are we in for a treat.

Presented by their newest brand ambassadors and two of the most popular celebrities today, James Reid and Nadine Lustre, Moto unveiled three new series’ of phones: The Modular Moto-Z Series with Moto Mods as the Flagship, the Moto G series on Midrange, and the Moto-E Power for the entry-level lineup.

The Moto Z is Moto’s newest Flagship smartphone. It’s built using military aircraft-grade aluminium and stainless steel for durability combined with an amazingly elegant build. It packs a 5.5-inch Quad HD AMOLED display and is powered by the top of the line Qualcomm Snapdragon 820 processor with 4GB of RAM and 64GB of internal storage. Moto also claims that this device has up to 24 hours of battery life.

In the imaging department, the Moto Z houses a high-resolution 13MP camera with OIS and Laser auto-focus, allowing the user to capture amazing photos even in the most challenging conditions. The 5MP front-facing camera also has a wide angle lens for capturing more subjects when taking selfies, and its own LED flash, so that everyone looks great, even in low light conditions.

Sporting a 5.5-inch 1080p Super AMOLED display, the Moto Z Play almost has the same specs and modularity as the Moto Z with some major differences. While it has the same Qualcomm Snapdragon 820 processor and 4GB of RAM, The Z Play is equipped with a 16MP camera with Phase Detection Auto-focus and Laser Auto-focus for taking clear photos in any lighting condition.  The Z’s highlight however, is its battery life, which Moto says is up to an amazing 50 Hours. What’s more, its fast charging capability can yield up to 10 hours of battery life from a 15-minute charge.

The unique thing about the Moto Z series smartphones is that they can be equipped with mods to further boost functionality. What’s good about it is that you don’t have to do anything fancy as taking the back cover of the phone to use them. All you have to do is simply snap it on the unit, and you’re good to go. Let’s have a look at each of them:

Incipio offGRID Power Pack: This mod further extends the already amazing life of the Moto Z series phones by up to 22 hours at 2200mAh and is capable of quick-charging using TurboPower. Furthermore, various designer versions are available to suit your own individual style. Increased longevity, all in a snap. 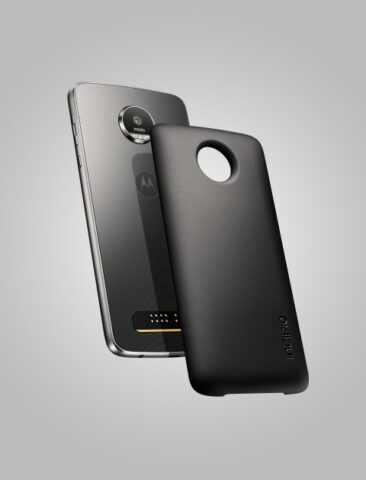 JBL Soundboost Speaker Mod: With 10 hours of battery life, this mod should be able to keep the party going with high quality mobile audio. You can also use it hands-free with its integrated kickstand, perfect for watching movies, outdoor getaways or simply listening to your favorite playlist. Moto Insta-Share Projector Mod: Love to watch movies with your friends and family? This mod can improve your viewing experience by projecting up to 70-inch images to any flat surface and comes with an additional 1 hour of battery life. You can use it for collaborative sharing on social media and or for watching 10 to 120 minute videos, movies or documentaries using the integrated kickstand. Hasselblad True Zoom Camera Mod: This mod brings 10x optical zoom and 12MP sensor resolution to the Moto-Z phones for high quality output even from a distance. It also has Optical and Electronic Image Stabilization to take out shakes when taking photos and videos. Capable of Video resolution is at full HD together with several capture modes, the ability to save in raw format, and xenon flash lights, this mod give a premium feel when shooting your photos and videos. Moto Style Shell Mods: Premium design back shells that transform the phone to suit your individual style. Users have the option to choose from real wood, leather, or ballistic nylon which can be customized according to the user’s outfit.

With a 7.9mm thin body, the fourth generation Moto G4 still pack a punch under its hood with a 3000mAh battery and an octa-core processor to handle daily tasks with ease.

The phone has a 5.5-inch Full HD display and a 16MP rear camera with a large f/2.0 aperture to allow users to take impressive photos even in cloudy weather. Its dual LED flash also offers automatically adjusts so that photos come out with natural looking skin tones and consistent colors. The 5 MP front-facing camera also has a wide angle lens to fit more subjects in your selfies. The software has also been designed to accommodate in-depth setting such as ISO and aperture to your liking.

The G4 Play was designed with performance in mind. Sporting a quad-core processor, 2GB of RAM, and a 2800mAh battery, it should be able to handle multitasking with ease and should last an entire day. It has a 5-inch HD display which presents sharpness and vivid colors and is also protected by a special water-repellent nano coating. A little spill, splash or even a little rain should be of no concern for this device.

The Moto G Turbo Edition has powerful graphics capabilities which should give users a great experience when playing games. If in need of power, the TurboPower charger can give the phone 6 hours of battery life from a 15 minute charge. In terms of imaging, the Moto G Turbo Edition has a 13MP camera which takes great photos in any lighting condition. It also has 4G LTE capability and a 5-inch HD screen which gives you all the real estate you need for a great viewing experience. It also comes with some nifty tools such as Moto Assist, Moto Actions, and Moto Display, all of which are designed for ease of use.

The Moto E Power is designed to keep up with today’s multi-faceted lifestyle and is equipped with a quad-core processor, and 4G VoLTE capabilities. This should allow users to fully enjoy a seamless experience surfing the web, updating their social media accounts, and streaming videos. It also has a potent 3500mAh battery, so that users can play games, watch videos and get in touch with their loved ones without having worrying too much regarding the device running out of juice.

The Moto E has a 5-inch HD display for media consumption. The display also features a built-in smudge-resistant screen and a the same water repellent nano-coating found on the Moto G4 Play.

Imaging is taken care of by an 8MP camera with auto-focus technology for blur-free photos, and a 5MP front-facing camera which has beautification mode for that perfect selfie.

Buy a Moto Z or Moto Z Play and Get a JBL Soundboost Speaker Mod For Free! (Limited Time Period and Selected Outlets Only)