Hey guys! You better check out what we’ve got from O+ USA, the O+ Convertible. We’ve been using this for more a month now, and everything has been really great so far. But before we post our full review, we would like to share with you our unboxing experience. 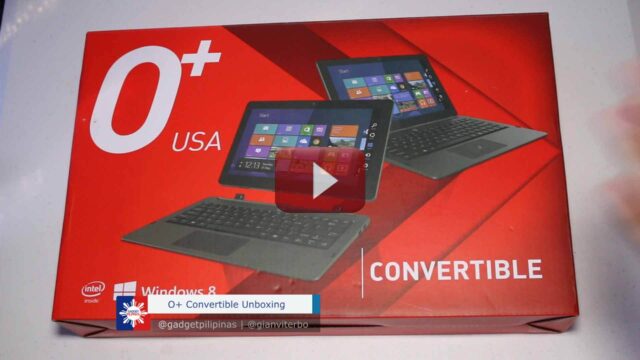 The laptop’s metallic brush finish is highly attractive. And I have to point out that its construction and build are both sturdy and stylish. The tablet portion is heavy and clunky on the hand, but that’s definitely forgivable as it has all the necessary parts, which make the device tick. Unlike some Asus hybrid Windows devices, the only way to remove the tablet from its keyboard dock is to pull it from the base. The tablet magnetically and magically attaches to the base when placed near it. Obviously, the touch screen laptop/tablet is not devoid of hardware keys. Its sleep/wake buttons (yes, there are 2) may be found at the tablet’s top and side bezels. Ports are also available: there’s a micro-USB port below its side sleep/wake button, which may be used for charging and OTG. Its 3.5mm headphone jack is located above the device, which I find a little off since I’m an earphone and headphone guy. They could have at least placed it on the right or left side so the cable wouldn’t keep on dangling and sometimes blocking the screen while I work. I had a great time using O+ Convertible’s keyboard. Key spacing isn’t too tight, and keys that are often used (Enter, L Shift, and Backspace) are big enough and aren’t too difficult to reach. As a hybrid device, the O+ Convertible lets users experience it as a Windows 8.1 tablet and a laptop. As a writer, it brought me the benefits I needed to finish my write-ups on the go, and even access my files in the cloud via OneDrive. For more O+ Convertible, tune in to our YouTube page and Facebook page. Meanwhile, if you haven’t watched our unboxing video, check out this link.

Send Testimonials to Family and Friends with Testee

realme Pad Launched in PH Along with New...