We Unboxed the SKK Mobile V2 and We Liked It

Let me take you through what’s inside the retail box of the SKK Mobile V2. Be sure to hover and click the image hotspots below to see the details:

I must admit – I did not expect to be bedazzled by the V2’s striking resemblance to LG’s G2 or G3. Some would call this knockoff, and we don’t entirely disagree; but SKK Mobile made sure to surprise its consumers that V2 has a lot of awesome things beyond its looks. 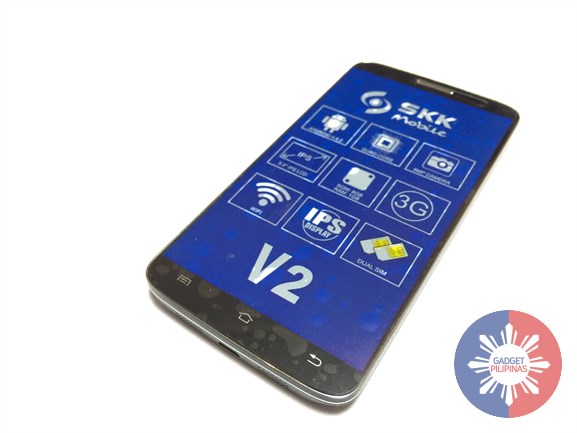 One of the uncanny similarities of the V2 to G2 is the placement of its keys: sleep/wake and volume. Everything is conveniently located at the back of the phone, where my index finger usually rests while using the phone with one hand. Above the keys is where the main 8-megapixel camera can be found; and beside it is the LED flash and heart-rate monitor. Yes, there is such a monitor at the back, and it works!

Ports-wise, the microUSB port can be found at the center-bottom and sandwiched by 2 speakers, while the 3.5mm jack can be seen just atop the phone.

The almost side bezel-less 5-inch screen looks okay but its 960 x 540 resolution is kind of a letdown especially if you’re into consuming HD and Full HD content. At the top of its screen are the speakers, sensors and 5-megapixel camera; while below it are 3 touch-keys (that do not light up). The edge of the screen shows a chrome-rim that encircles through it. Another chrome-RIM can be seen on its side-bezels just a pinch after glossy black exterior side casing.

Its back panel is user-removable, and may be removed by simply lifting the nib found at the lower left portion of the panel. SKK V2 is pre-installed with the latest version of Kitkat. I haven’t gotten any word yet from SKK if this will be upgraded to Lollipop. You will not see a Vanilla and unadulterated version of Kitkat on this smartphone. SKK too inspiration from LG’s and Samsung’s UI and installed it to the V2.

Certain unique features came along with the customization SKK put on the V2. These features include:

The phone’s quad-core processor is clocked at 1.3Ghz (MT6582). It’s complemented with Mali-400 GPU and 1GB of RAM. These are low range specifications, but would definitely be useful for software and games that don’t require too much power. We will subject this to further testing, and give our field report on our review soon.

Obviously, we can’t give a verdict yet as this is just an unboxing and first impressions. To further help us know what you wish us to know and test, please shoot the comments section. I’ll my best to answer all of ’em on our review, and if there’s a need, I will answer your questions right away on the comments.