[su_dropcap style=”flat” size=”4″]S[/su_dropcap]hortly after the successful launch of Selfie and G2 last December, Cherry Mobile shocked us with a new flagship model that’s worthy of praise – the Cherry Mobile Cosmos One Plus.

Cosmos One Plus, hereby referred to as C1+, bears a lot of resemblance from last year’s Cosmos One but with a bigger build and monstrous specs. While I find ‘monstrous specs’ as an understatement, it’s always best to subject it to initial and rigorous test. This time, allow me to give you my initial impressions, which can hopefully give you an idea whether this smartphone has all the right to be your next device or not.

C1+ is placed in a premium black box with gold plated brand marks and prints. It clearly sent me a message that there’s a bad-ass inside. The box includes all the usual stuff you can find inside Cherry Mobile’s retail boxes except for the free Smart Cover.

Let me give you a quick tour of the smartphone: The Cosmos One Plus. The device has 2 microphones – one located on top of the phone almost near the 3.5mm headphone jack while the other one is located at the bottom beside the microUSB port.

You can find the speakers at the back and its 14mp camera with LED flash.  C1+ also has an NFC chip located underneath the back panel. While it isn’t mentioned in the specs, C1+ also features HotKnot technology, which is similar to NFC but a proprietary of Goodix and Mediatek. It does not require any NFC – although the C1+ has one – but approximates the functions of NFC technology. It’s plastic all over except for its alkali-aluminosilicate sheet toughened glass screen. Its back panel is plastic with a texture and feel akin to the previous Cosmos One.

It’s also a bit thick, so if you’re into thin devices, this could be an issue. Below is a photo of C1+ compared to the iPhone 6 Plus, which has the same screen size for comparison purposes. This is undeniably the most powerful smartphone that Cherry Mobile launched. With a processor clocked at 2.0Ghz and 3GB RAM, Cosmos One Plus is simply the best in a lot of fields – gaming, productivity and media consumption.

I downloaded Real Racing 3 and it opened without any issues and lags. Navigating through its UI was a breeze, and playing through was smooth. In so far as gaming is concerned, I can initially report that the Cosmos One Plus is capable of getting into beast mode. [INSERT TITO COSEJO’S FACE HERE]

I was also able to play Star Wars Knights of the Old Republic with minimal frame rate issues. 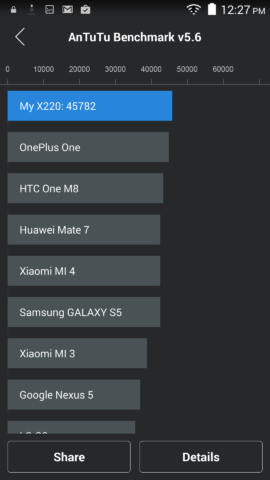 C1+ is pre-installed with Android Kitkat 4.4.2, and upgradeable to Android Lollipop. Cherry Mobile didn’t mention about the schedule of the Lollipop OTA, but it’s something that I really look forward to. Cosmos One Plus will soon be upgradeable to Lollipop soon.

Cherry Mobile implement minimal skinning on its UI. Icons are not stock Android, and there are additional bells and wishes tucked into its settings like:

C1+ is also pre-installed with applications:

Other than its monstrous processor and RAM, camera is one of C1+’s crowning glories. Armed with Sony’s new sensor, Sony IMX 214. It’s the same sensor that can be found in Nexus 6.

Cosmos One Plus’ camera is a mobile photographer’s bliss. It takes amazing photos with great detail and color precision. It also supports HDR video imaging at full resolution (30fps).

I believe that the best way to show how how great this camera is, take a look our sample photos below. For better loading, we compressed the images, but all uncompressed and untouched photos may be downloaded from this link.

It’s less expensive than the recently announced Starmobile Knight X. It is decently priced vis a vis its monstrous specifications. It is battery user-replaceable. It also has the fastest octa-core processer released by a local company – 2.0Ghz Mediatek Octa-core processor. You can also take great photos with its 14mp Sony IMX 214 sensor. What more can we ask for?

While it’s too early to give verdict, we can initially say that this one’s truly a beast – specs-wise; and a worthy contender in the smartphone “arena”. There are tons of devices, even from international brands, that can go head to head with C1+. Let us fiddle with this device a little more time so we can further test it and give you an even more detailed field report.