Some Pinoys love handy-dandy gadgets specially if you can do a lot with it like browse the net, play games, use it for presentation, watch movies and practically do things similar to what you can do with a ordinary netbook. No, I’m not speaking of the N900 which I’ve featured a lot on my recent posts, but the Asus EeePC 1005. I can say that even though this netbook is really petite, it’s packed with several features that one would be very proud to have for a UMPC (ultra-mobile personal computer).

What else is new with this cute-yet-cool (why can’t I think of other adjectives…) gadget? Here’s a quick review! Allow me to answer some concerns as well like – Will it be practical if I get this instead of other UMPCs; Will it benefit me as a Pinoy; About the price, is it value for my money.

Click Read More to continue with the Full Review.


This netbook measures 10.3″ x 7″ x 1.4″ at its thickest point, and weighs 2.8 pounds with a 6 cell battery or 2.4 pounds with a 3 cell battery. It’s technically thinner and lighter than its predecessor, the Eee PC 1000. I used the gadget myself and I’ve never felt more comfortable in using a netbook. Though the glossy texture of the front panel is smudge-magnet, I couldn’t discount the fact that its design impressed me (you can also use it as a mirror). The look and feel of the device is more techie like you wouldn’t mind showing it off to your friends (you show-off!)

I noticed as well that the new UP (Page Up) and DOWN (Page Down) keys have shrunk. Perhaps, Asus realized that the Right-Shift key is more important than Up-Down arrow keys. The CRTL and Fn keys are now equal on size compared to the former elongated CTRL Key in Eee PC 1000. There is also a key devoted for Asus Super Hybrid Engine with the help of the Fn+Spacebar buttons. The A.S.H.E (perhaps a reminiscent of a Final Fantasy Character) may be used to overclock or “underclock” the processor if you wish to maximize the use of the the processor or conserve battery respectively.

The new look of the touch pad is awesome. It’s braille-like design is over the top but it’s so tiny though. I loved the way you can zoom in and out a picture or document using pinch in and out gestures. (How exciting would it be if Asus develop an Eee PC with multi-touch capable capacitive screens.) 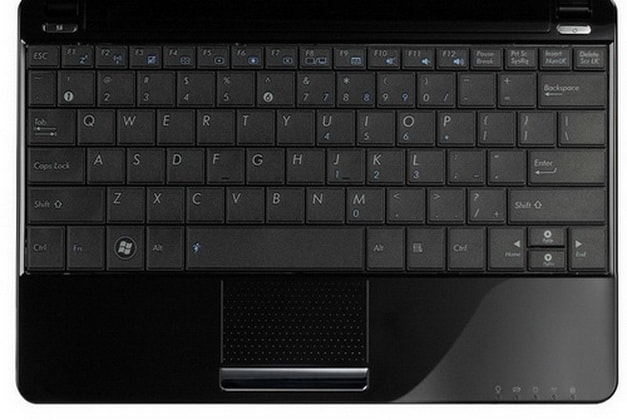 If you’re loooking for power and speed, this laptop is not for you! Its processor may not be a Speedy-Gonzales, but its pretty good on hyperthreading so you should be able to perform light weight computer tasks like surfing the web, playing videos and playing Plants versus Zombies. Thanks to Intel’s 1.66GHz Intel Atom N280 CPU. The ram is only 1GB but you can technically upgrade it easily. Here’s video how to upgrade it.

This device is also pre-installed with kick-ass hardwares like Wifi 802.11N wireless adapter which can significantly enhance your communications and computing experience, massive storage space of 160HDD and an online drive of 10GB and an optional bluetooth adapter. What else can you ask for?

Surprisingly, this device already has a top-notch OS installed – Windows XP Home. It’s up to you if you want to explore the idea of installing Windows 7 in it. I’m sure that it’ll be a blast!

I tested one of the applications under Eee Xperience – the Voice Command. When I clicked it, a freaky tiny robot appeared and introduced itself as Dr.Eee. How do you read that? I read that like a kid shrieking (Eeeeeeeee!). It’s not an extraordinary application because it’s your usual assistant for activating Windows applications using your voice. I liked it though. Will this put an end to the Eee PC’s keyboard? Totally not! I wouldn’t even dare using this feature inside Starbucks!

Yes, the Eee PC 1005HA is really an impressive handy-dandy gadget. It’s packed with a lot goodies and for a typical mobile user, it may be considered their best. For a power user, it’s a loser because it’s not really for built for that purpose. This may not be my kind of netbook, but it may be the best for you.

The Eee PC 1005HA is stylish and mobile and these are two of the reasons why this netbook is selling like hotcakes in the Philippines. With its redesigned look and keyboard layout (with minute difference from it predecessors), it looks even far better than the other Eee PC’s.

Priced from Php 21,999 to Php 24,999, Eee PC 1005HA is really a value-for-money netbook. If you can spare this much, but it now! I highly recommend it to mobile users with IAD (internet addiction disorder) to further their mind disorder or facebook users who can’t end the day without visiting their pet in pet society. Just get one with installed bluetooth adapter, pair with your 3G/HSDPA handset and fire away!