Back in 1998, the ASUS P6300 laptop went into space aboard the MIR Space Station for a 600-day mission. During that time, the laptop managed to pull through without overheating or breaking down.

Fast forward to 2022, and ASUS is celebrating 25 years of that special event with the launch of the Zenbook 14X OLED Space Edition.

On paper, the Zenbook 14X OLED Space Edition is mostly the same as the regular Zenbook 14X OLED. There are of course, a number of differences. Let’s start with the most obvious, the design.

This space-themed laptop has symbols and Morse code written all over. Underneath, you’ll even find the words Space Edition, MIR, Zenbook, and even the words Ad Astra Per Aspera, which translates to “through hardships to the stars,” celebrating the milestones of space travel.

ASUS says that the finish is called Zero-G Titanium, inspired by the metal’s use in spacecraft construction. Honestly, I find it really unique and fresh, and I’d say it really looks awesome. Moreover, the laptop is SMC-S-016A Compliant, which basically means it’s designed to withstand the demands of space travel.

The spacebar and power buttons are also finished in a different color, with the former having a logo of a planet. The only issue I have with this is that some of the sections where Morse codes and symbols are are covered by the stickers that you’d usually find on these laptops. It sort of ruins the overall look in a way, at least for me.

You get the ErgoLift Hinge, which raises the ErgoSense Keyboard at an angle for a more comfortable typing experience as well as to facilitate better cooling. The keyboard offers three levels of backlighting, and the power button also acts as a fingerprint scanner. As for the typing experience, input registers quickly and there is a good feel of responsiveness.

The touchpad is also large enough so you can drag things across the screen without having to lift your finger, and the overall feel is like gliding in silk. You can also turn it into a numpad by a short tap and hold on the dedicated button for those quick calculations that you need to do.

For ports, you get a full-sized HDMI port, two USB-C Thunderbolt 4 ports with support for DisplayPort and Power Delivery, a USB Type-A port, a microSD card reader, and a headphone/microphone combo jack.

Perhaps you’ve already seen it, but the thing that clearly separates this laptop from regular Zenbook 14X OLED, is the 3.5-inch ZenVision monochrome display on the lid, which can show a number of things – preset animations, customized text, and even a QR code plus a message. Not exactly as fancy as the AniMe Matrix on the Zephyrus G14, but it does have a few use cases that I can think of, one of which is for promoting say, your Facebook page or website.

Then there’s the display, which is probably the bread and butter of this device. It’s a PANTONE Validated 14-inch 2.8K OLED screen with a 90Hz refresh rate, 0.2ms response time, 550nits of peak brightness, and covers 100% of the DCI-P3 color space.

And while that means it’s good for creative who would want to work with a color-accurate screen, it’s even better for watching movies, viewing pictures, and even just browsing websites. You’ll be spoiled with rich colors and deep blacks that you probably wouldn’t want to go back to anything less.

The unit we have runs on an Intel Core i5-12500H processor, but there is also a variant that uses a Core i7-12700H for those who demand more horsepower. It’s unfortunate that ASUS Philippines isn’t offering the highest spec version that packs the Core-i9 12900H.

Just Like the Zenbook 14 OLED, this does not have a dedicated graphics card and relies on Intel Iris Xe graphics, which, to be fair, should be more than enough for the tasks that this laptop is meant for. There is 16GB of 4800MHz LPDDR5 RAM and a 512GB M.2 NVMe PCIe 4.0 SSD for storage, is enough for me, but may not be for those who have a large collection of media or working with larger files.

For cooling, the laptop is equipped with ASUS’ IceCool technology which employs a dual fan cooling system along with two heat pipes. Each fan is designed to deliver better flow rate and lower noise compared to ordinary fans.

You can use this laptop for basic photo editing and video editing, depending on the complexity of your video. You can even play some games on it like esports titles, but you’ll probably have to play around with resolution and other graphics settings to get the most optimal experience. Just remember that at the end of the day, this is a productivity and entertainment laptop.

For the benchmarks, we ran the tests on every performance profile to see whether there are noticeable differences.

As one of the most popular benchmarking tools used by reviewers and enthusiasts, Cinebench R20 and R23 make use of the latest rendering architectures, and measures the capabilities of the device in rendering a specific scene with the latter having the more complex one.

Super PI is a benchmark tool that measures performance based on how a CPU can calculate Pi to the nth digit.

WPrime, on the other hand, measures performance based on finding prime number using Newton’s Method, in this case it’s set to calculate 1024 million prime numbers. The shorter the calculation time is, the better.

Corona Renderer is a photorealistic render available for Autodesk 3Ds Max, Maxon Cinema 4D, and is used as a stand-alone application. It measures the time it takes to render a specific scene. The shorter, the better.

VRay is a tool that test CPU and GPU performance by rendering sample scenes within a fixed time period.

Google Octane 2.0 is a benchmark that runs a multitude of tests that represent use cases of Javascript applications. It’s a good representation of the dynamic and interactive web applications that are used today.

Just like when it’s used for smartphones or other mobile devices, Geekbench 5 tests the CPU’s muscles in both single and multi-core scenarios.

These tests show a minimal difference in scores for standard and performance, except for a few instances, but a significant difference between Whisper and Standard. This means that depending on which mode you use, there will be a noticeable increase or decrease in performance especially in tasks like image rendering.

As for thermals, the Core i5-12500H reaches an average temperature of around 77°C, reaching 100°C as the highest that was recorded during the test. Of course, that means you’ll really feel the warm air coming out of the back and sides, and you can also hear the fans going “jet-mode.”

While a 720p HD webcam is enough for online meetings, an upgrade to a better one would’ve been welcome. Its low-light performance is only average at best, and it’s probably good to have some sort of key light for a significant difference in quality.

Like with other ASUS laptops that I’ve reviewed in the past, the very first thing I did with this one was uninstall the proprietary anti-virus software and stick with the standard Windows Security Suite, because based from experience, it’s enough.

Similarly, you also get the MyASUS app, which lets you manage various settings for your laptop including fan profiles, battery, network, AI Noise Cancelling, and so much more. It also shows you the overall status of the laptop.

Like the Zenbook 14 OLED, this also comes with a lifetime license for Microsoft Office Home and Student 2021, plus a three-month subscription to Adobe’s entire suite of apps. All of which you can also claim via the MyASUS app.

It’s also here where you can adjust the settings for the ZenVision display. You can have it show a preset animation, your own customized text, or even show a QR code, which you can then link to your social media page or website.

Compared to the Zenbook 14 OLED’s 75Wh battery, the Zenbook 14X OLED Space Edition only has been fitted with a 63Wh power pack. As such, it will be interesting to see how much this will affect actual battery life.

For this test, I have set the laptop to how I would normally use it when I’m outside. Display at 50% brightness, volume at 80%, no external devices connected, Wi-Fi enabled and connected, and keyboard backlighting at level 2. Performance profile is set to Standard, and refresh rate is set to 90Hz.

The result? with a combination of tasks like watching YouTube, browsing social media, email, and editing on WordPress online, I got very close to 3 hours of uptime. Personally that’s okay as that’s more than the usual amount of time that I spend inside a café or even in events, with the laptop on.

In general though, it’s not good enough, especially if you’re the kind of user who has multiple meetings throughout the whole day, or if you’re going to spend time in an all-day conference, you’d just prefer to have that extra bit of uptime. Of course, my ideal usage settings may not be the same as yours, and there are a bunch of things that you can do to extend battery life such as lowering the refresh rate and brightness or by connecting to Wi-Fi only when you have to.

The silver lining is that you can charge the Zenbook 14X OLED Space Edition using a variety of USB-C chargers, Power Delivery certified chargers, airline chargers, and even power banks. Using the included100W fast-charger adapter, 5% to full took just a few minutes past an hour, which is impressively quick. 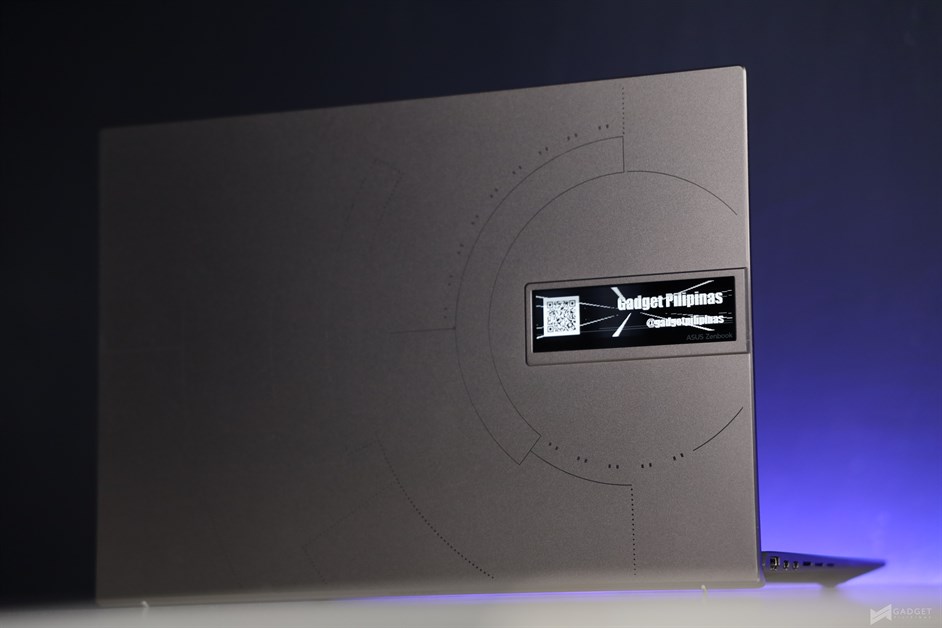 ASUS Zenbook 14X OLED Space Edition UX5401ZAS Review
Our Verdict
There are many things to like about the Zenbook 14X OLED Space Edition. The design looks really good and even unboxing it is quite a journey. I love that ASUS puts this much attention to these things, like the addition of the ZenVision display, as it sort of give you a feeling that you have something that's not common, in a good way. If your workload is the same as mine - Documents, Spreadsheets, Presentations, email, updating social media, streaming via YouTube, a bit of photo editing, and occasional video editing, this is a great machine to work on. It's even better for media consumption, thanks to that eye-candy OLED display. Of course it's not perfect, the processor can get a bit toasty and you'll definitely feel that when typing at times. You'll also be paying for the touchscreen, whether you are going to use it or not. The button for enabling the Number Pad is also very sensitive, and personally, I've activated it unintentionally quite a few times. Then there's the battery life, which is dismal, especially if you're planning to use that 90Hz refresh rate all the way. For something that's priced at PhP84,995, I find that very underwhelming. So, would I recommend this laptop? well, if you want a laptop for productivity and entertainment that also has a unique look and that extra screen, I'd say this is worth the extra money. Otherwise, you can probably go for the non-space edition, which basically offers you say 80% of this laptop, for a lot less, or even the Zenbook 14 OLED, which has the better battery, at least on paper, but still costs less.
Design and Build Quality
Display
Performance
Software
Battery Life
Price
What's Good
Beautiful and unique space-themed design
Eye-candy and color accurate display
Good overall performance
Comes with free lifetime license for MS Office
ZenVision display is great and unique touch
Good speakers
What's Not
Underhwelming battery life
Processor can get a bit toasty
Quite pricey for what is still a Zenbook 14X OLED specs-wise
4.2
0 comment 0 FacebookTwitterPinterestEmail
previous post