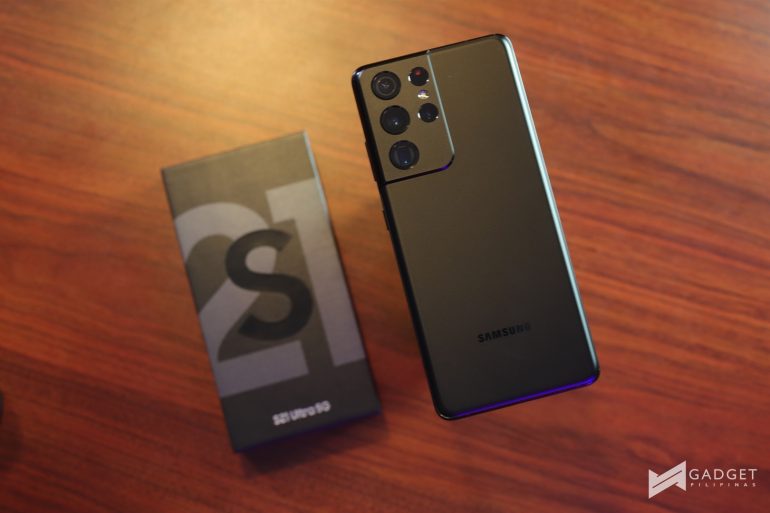 This dreary pandemic has pushed consumers to buy devices that can help them with their job and passion. Smartphones, which are now seen as undeniable tools for productivity, have suddenly become even more important than ever.

The pandemic didn’t make Samsung flinch this year. In fact, the Korean giant even flexed its way by launching the new Galaxy S21 series earlier than usual. Headlining the series is the Galaxy S21 Ultra, and today I am finally able to share my full review to all of you. Unboxing the Samsung Galaxy S21 Ultra was something that I somehow expected. There isn’t much thrill and excitement because you’re just basically getting the box, the phone, SIM ejector tool, charging cable – yes, there is one contrary to some reports – and some paperwork. There is no charger included in the box, and that’s quite a bummer for some people. In hindsight, doing this will both help Samsung in reducing their cost, and … well, technically mother nature because of reduced carbon footprint. Anyway, I digress.

The cost has remained almost the same versus last year – the 256GB variant costs PhP69,990, and the pre-order exclusive costs PhP79,990, but you’re getting a faster and better configuration.

What I have is the Phantom Black version of the device. I would just call it matte black, and it’s amazing! I’m a huge fan of this design, and their new take on the camera bump is definitely something that I’d like to focus on. They call this contour cut design, and it’s a really neat way of blending the camera bump to the side bezels. The blending is perfect, and the subtlety of its overall design is something that I totally dig. Coming from the Galaxy S20 Ultra, though, I think it’s a matter of preference if you’re going for the glossy design of it rather than the one on S21 Ultra’s matte finish. It’s obvious that this one’s a big boy! This one is a little taller and wider, but Samsung was able to reduce its thickness. The bump is obviously slimmer this time around, but this is something that you wouldn’t want to carry around if you’re got tiny hands.

Buttons are situated on the right side, while the ports are at the bottom. There are 2 microphones at the top and another one just beside the sim tray. There is no IR blaster so don’t expect this to be your alternative remote control unless you’re using SmartThings on your Samsung Smart devices.

The display of the new Galaxy S21 Ultra is smaller by .1 inch. It still sports the same resolution and display refresh rate, which will definitely delight consumers. It’s also HDR10+ compatible and now sports a new Gorilla Glass Victus, which is definitely better than it’s predecessor. There’s also something different about its display too. Among the 3 new Galaxy smartphones, only the Ultra is compatible with the new S Pen. Yes, just in case you missed it, Samsung now has an S Pen for Galaxy S devices. Galaxy S21 Ultra gets first dibs in terms of compatibility, and this someone speaks of the fate of the Note series.

It seems that the S21 Ultra has a special digitizer, which the S21 and S21+ do not have, which makes it responsive to the new S Pen. We reached out to Samsung, but they have not replied at the time of the production of this review.

Let’s get into the performance side of things this time around. For what it’s worth, the performance of last year’s S20 Ultra was not bad at all, but it’s something that wouldn’t be able to compete directly with phones packed with Snapdragon 865 and even 865+. People blame the underperforming Exynos 990, which I also believe is the main culprit; but this time – with Exynos 2100 on board, things seem to be much better in terms of performance.

Let’s now move into the benchmark results, which was the first thing I did when I got this device. The data you’re seeing now will form part of our full review, so be sure to take a screenshot if you want to remember these data.

The performance result inched closer to Snapdragon 865+ based on my benchmark. This shows that Exynos chips are getting better especially with the new configuration of their processors this time around. This, however, puts S21 Ultra in an awkward position because it’s smacked in the middle of devices that are or will have Snapdragon 870 5G and 888 configurations. Yes, there is Snapdragon 870 5G now, so in case you missed it, check out the link right here.

Phones like Galaxy S21 Ultra in the US or even the upcoming OPPO Find X3 Pro are expected to have a better performance yield, which is about 20-30% better than the previous generation, at the very least. Nevertheless, the Galaxy S21 Ultra is definitely a worthy flagship option regardless of your reason for owning one.

While this device is not advertised or heavily positioned as a gaming device just like the Legion Duel or ROG Phone 3. I was able to play flagship mobile games without any issues even at maximum settings. Games like Genshin Impact, for instance, play at flawless 60fps with Motion Blur turned off. We have full gameplay benchmark results on our website, so be sure to check that out when you’re free.

Perhaps, the main reason why you’re getting the S21 Ultra is because of its camera features. The new cameras are beefy with features, and the improvement from the previous generation is just way above my expectations. The new 108MP camera and the implementation of features attached to it sort of redeemed the problems we encountered in S20 Ultra. You’re also getting a dual pixel 12MP ultra-wide camera, and 2 dual-pixel 10MP telephoto lens. As my editor would say, the rear cameras of the S21 Ultra are super busy and stuffed with features that some would either consider gimmicks or essential ones, however one would really perceive it. There are a couple of things that I’d like to highlight here. These are the camera features that I actually enjoyed and I thought of sharing them with you. It is very likely that you’ll love these features too, so here we go.

The new zoom lock feature when using the 100x zoom is heaven-sent. This makes things easier for you to zoom in to a specific subject, which I had problems doing with the S20 Ultra. I also noticed that the photos I took using 100x zoom are sharper and clearer than before.

You can now also take advantage of all its lenses to shoot 4K 60fps. This is the first time in their lineup of devices that is why they are able to take advantage of it with the new camera features! Shots in 4K are acceptable, but I would have wanted it to be sharper and perform better especially in low light scenarios. You can also shoot at 8K, albeit locked at 24fps. I hope you they can at least let us record at 30fps, at most.

The Director’s View is also another camera feature that I’ll likely use more with this device. The fact that you can use the lens to create new stories and content will definitely excite content creators out there. Whether you’re into TikTok, YouTube Shorts or Instagram Stories, you can definitely extend the breadth of your creativity to various ways! Another feature that I truly enjoyed is Single Take! This is where the super matured AI plays with the S21 Ultra’s cameras. You can produce 10 contents with a single take, and that brings a lot of convenience to consumers!

Apart from camera, the new One UI 3.1 features new improvements and subtle redesigns. Overall design looks more “roundish” and the accessibility to new features are easier. There are now new Always On Display designs, and you can also customize it with custom images that you can download online. How about battery performance? Pulling this test was somehow tricky because my usual methodology using PC Mark failed twice while testing this device. I had to resort to doing video loop test while the screen is set at 30% with WiFi turned on. It took 12 hours before the battery reached 20%. This should give you an idea of how well this performs in this scenario. We’ll be able to give you more empirical data when we finish our video game benchmark soon.

The Samsung Galaxy S21 Ultra is exponentially better than its predecessor. While its processor’s performance has tremendously improved versus the Exynos 990, it still falls short versus its Snapdragon counterparts. By counterparts, I’m speaking here of the Snapdragon 865+ and 888. Samsung has also gone all out with their cameras, and all the technologies that come with it.

The strength of the Galaxy S21 Ultra can be seen in content creation and overall user experience. Samsung’s efforts to improve its software has totally paid off with this smartphone.

Should you buy it? Yes! If you’re in the market for a new flagship smartphone that will replace your old Android smartphone or your iPhone, consider this your new phone. The steep price, if you are the intended consumer for this device, should not be an issue if you’ve been considering getting an iPhone 12 Pro Max.