Everyone has been asked, at one point in their life, what they want to be when they grow up. Want to be the next great composer? How about becoming a modern day Da Vinci? Want to invent the next best thing to sliced bread?

And to this we answer, in your Dreams!

This is normally a reply you wouldn’t want to hear but in this case, we actually mean it as the latest PS4 exclusive from Media Molecule, creators of hits such as Little Big Planet and Tearaway, will let you do just that.

Your only limit is your imagination, and you’ll see exactly why in our review of Dreams Universe!

Dreams Universe, or Dreams for short, is a lot like Little Big Planet, but on steroids. If by any chance you’ve sunk countless hours creating your very own unique levels for Sackboy to run in, then you’d already have an idea of what Dreams has to offer.

It’s not quite the fair comparison because Dreams is so much more than a simple level editor or dungeon designer. Putting it bluntly, Dreams is comparable to a game development engine of sorts, where you can create not just levels and characters but full fledged experiences if you have the patience and creativity to do so.

“Creation games”, as we’ll call it, isn’t exactly a new concept. We’ve seen titles like Fighter Maker, RPG Maker, and of course Little Big Planet back when it debuted in 2008. While these titles are pretty deep and detailed in their own right, Dreams takes the creation experience to a whole new level.

If anything, Dreams perfectly summarizes the whole experience as the game allows you to build something either from scratch or by modifying community content and Media Molecule themselves treats us to a fantastic intro piece in what is fittingly called “Art’s Dream”.

Art’s Dream is a single player game (a literal game within a game scenario!) where you play through a short but meaningful story about someone dealing with fear and self-doubt, as conveyed through his dream sequence. It’s one part point-and-click interactive movie, another part platformer, one part driving, part shooter, and even part bullet hell game. In short, Art’s Dream is the perfect showcase of what future creators can expect to bring to life as they dive deeper into the world.

Speaking of short, Art’s Dream is not a very long game. As a matter of fact it’s highly likely that you’ll be able to finish it in just one sitting. Spanning about 3 hours give or take, each genre presented in the game transitions in and out very well and feels just right that no level outstays their welcome.

It’s a charming 3 hours or so, capped by a touching story with a cliche but powerful message about overcoming doubt and believing in yourself. While you won’t run into impossibly complex mechanics or mind blowing features (it’s actually very simple to beat), the point of Art’s Dream is to really show you what kind of masterpieces are possible using Dreams’ tools. When seen through this lens, Art’s Dream totally hits the mark and gives players a glimpse of what the game can do for them. Outside of Art’s Dream, the game is divided into 2 sections where you are invited to either Surf or Shape. After a series of tutorials to familiarize yourself with Dreams’s interface, you will then be guided to either browse community created submissions or an extensive engine that will bring life to your creations.

In Dream Surfing, you are basically brought to a central hub where you can view the multitude of user generated content from around the globe. It really feels massive in this sense! Throughout our time with the game, we’ve encountered a Star Wars scene recreation and even a level from Silent Hill. Often times you’ll stumble upon short levels and quick fixes but look hard enough and you’ll be able to find near full fledged experiences that will just make you wonder how long it took the user to actually create it.

As you would expect, you can give a thumbs up to particularly stellar creations and even give feedback that’s divided into separate sections for comments, reviews, and even bugs. From time to time, Media Molecule will even recognize top Dreamers, showcasing the best creations from the thousands out there.

Giving back to the community

Dream shaping is the actual creation part of the Dreams. Aspiring creators will spend most of their time here and with good reason, because as intimidating as it sounds at first, it’s actually as daunting as you would imagine.

A series of tutorial quests will take you through all of the basics of creating your first masterpiece, and it has to be said that they are very thorough and detailed. These interactive tutorials will teach you pretty much everything, from creating your own beats to rock to and even to how to design and animate a character. 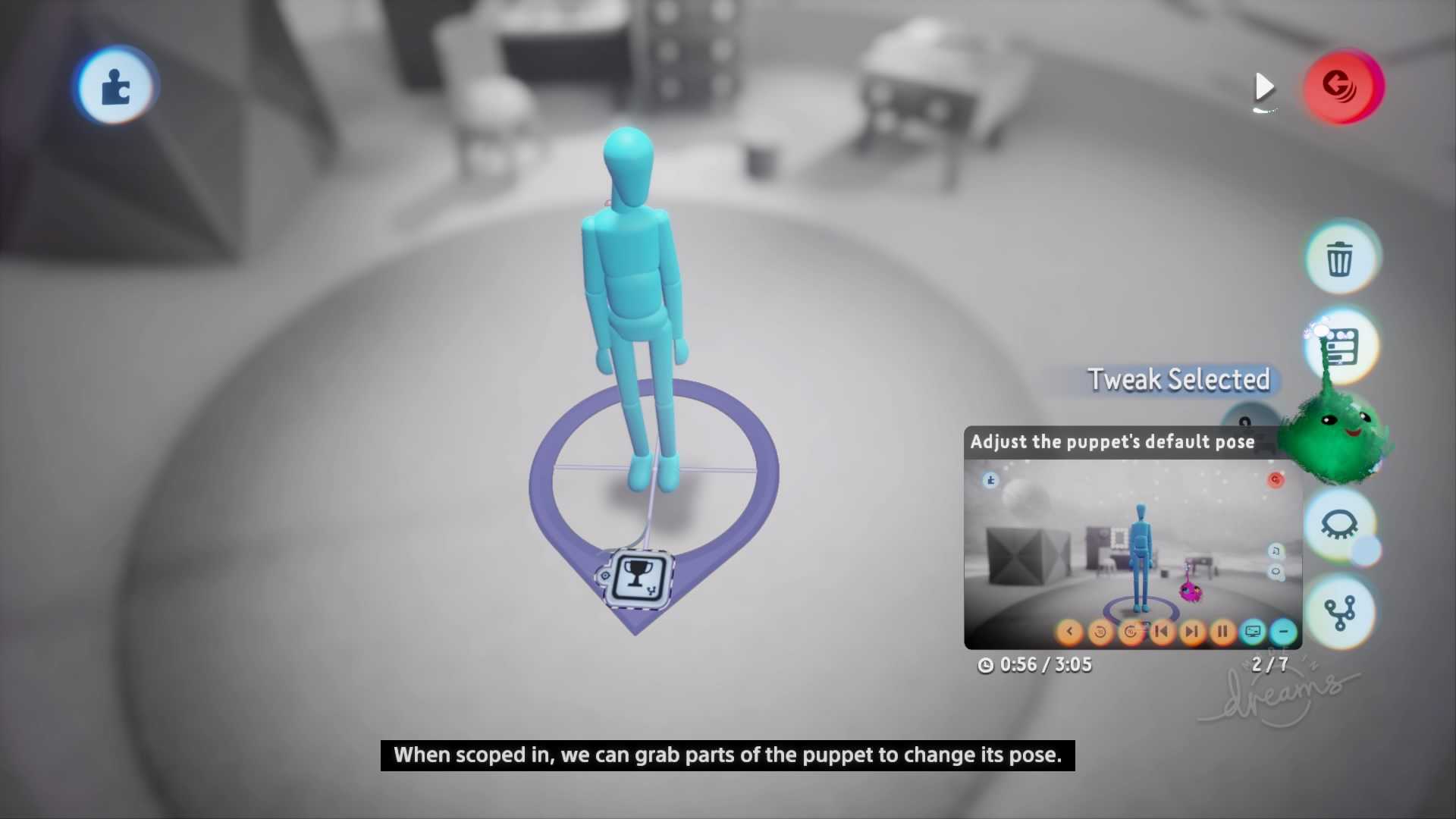 At times, you may find it to be overwhelming due to the amount of stuff you can tweak and create. There are tools upon tools to use, and some even have smaller sub-tools that will just leave you wide-eyed and mouth open for a bit. The game holds your hand pretty well throughout the process, and good guy Media Molecule even allows you to use pre-existing assets that allows you to hit the ground running.

One neat feature that the game allows is use of certain elements from other created works and using them as your own! Of course, proper credits are given to those borrowed assets, so no worries about “stealing” here. There’s really not much to say about Dreams except that it is an absolutely unique but enthralling experience. It boggles the mind as to how much detail you can put into a creation and if you’ve seen some of the best ones out there, you get a deeper appreciation of how the whole process of creating a game goes.

If anything, the motion controls could take a bit of time to get used to. If you tend to move around a lot during gameplay, there is a need to constantly re-center your cursor but it’s a very minor nitpick against a wonderfully dreamy experience.

Dreams is a great social experience at it’s core. The push to consume and create content to share with the community is fantastic and Media Molecule gives you all the tools you need to do so. If you’re not one to create, there’s always the option of trying everything out instead and that’s perfectly fine too!

Simply surfing through the available content will open you up to a world of experiences. There’s a Final Fantasy 7 creation, a Dead Space level, even a music video! It’s easy to appreciate the amount of work Media Molecule put into Dreams and you can see how much love the community is sending back by putting out creations that surely highlights the potential of the game.

Dreams has a little bit of something for everyone, but a whole lotta’ loving for those who choose to dream.