Lenovo’s acquisition with IBM allowed the company to own and further develop IBM’s successful ThinkPad series of laptops. Thinkpads were notoriously popular because of the red Trackpoint embedded beneath the “G” and “H” keys. These ThinkPads are geared towards corporations, mainly due to its features and durability. With the ThinkPad’s successful formula, Lenovo formulated the IdeaPad and ThinkBook series which has the striking features of the ThinkPad but are geared towards consumers and business people. On our slate is the Lenovo ThinkBook 13s, a laptop that packs ThinkPad DNA with a chassis that blends into your office. Does the ThinkBook offer something that ThinkPads can’t? Let’s find out. There are only a few laptops that could match Apple’s minimalist aesthetic, and the ThinkBook 13s is definitely one of them. Thinkpads generally have a black unibody design, but the ThinkBook 13s uses an Aluminum-Magnesium Body with a mineral gray finish.  Branding on the notebook is subtle with the ThinkBook logo in a darker shade of gray on the top left and the popular Lenovo logo on the lower right. 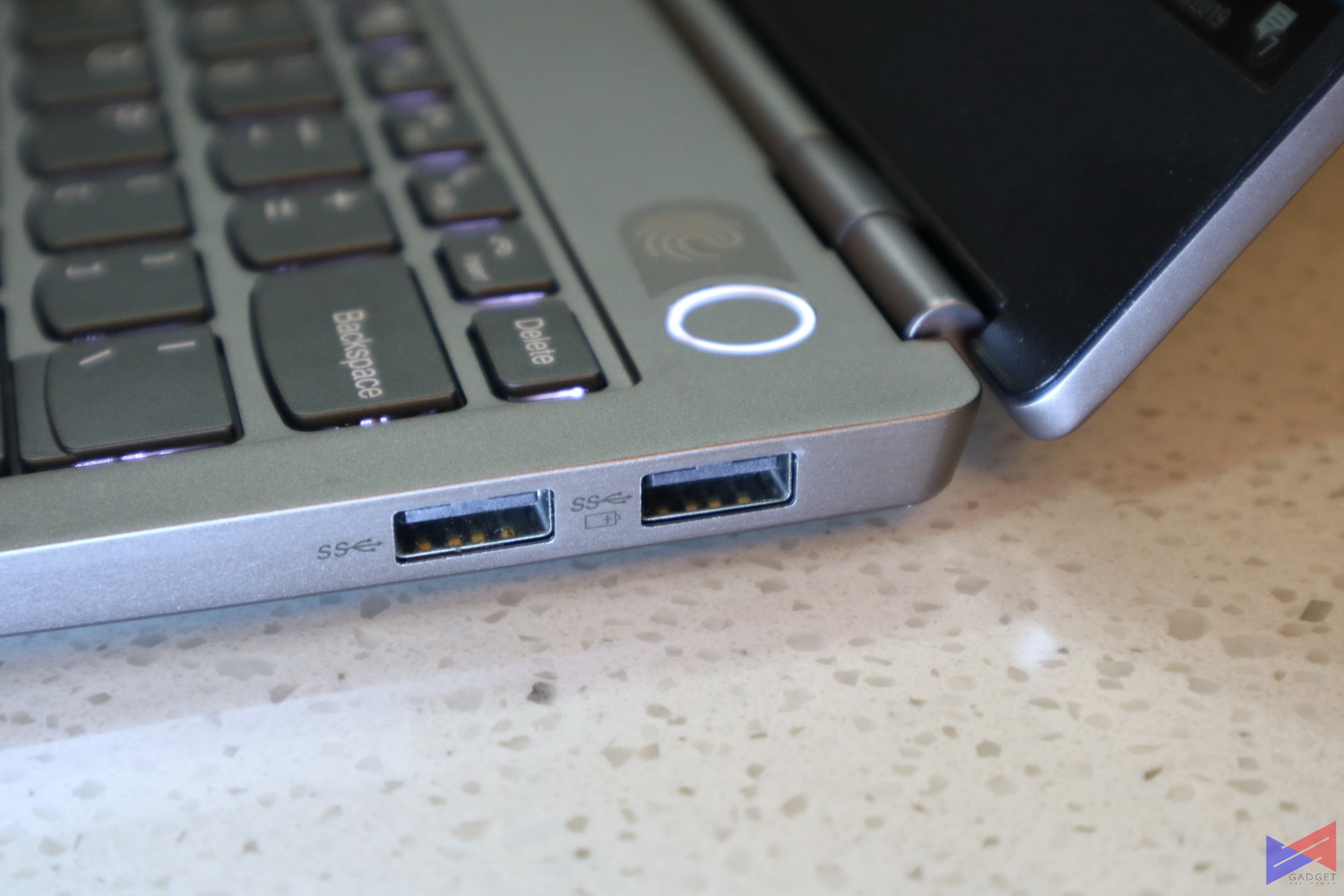 Connectivity-wise, there are two USB 3.1 Type-A ports on the right side, one of which has an always-on feature.  And on the other side, there’s an unconventional sized charging port, an HDMI 1.4b port, a USB3.1Type-C Gen 2  port, and a combo jack. Unfortunately, the Type-C port doesn’t support Thunderbolt 3 for more throughput.

Since the ThinkBook 13s Ultrabook is on the thicker side at 15.9mm with it being able to pack an HDMI port, it would’ve been more helpful if it also had a MicroSD card slot and an ethernet port. One of the core features from the ThinkPad that made its way to the ThinkBook is the keyboard. Though it doesn’t have the notorious red Thinkpoint, the typing experience is very similar across Lenovo’s premium line of notebooks. The keys on the ThinkBook 13s are less tactile than the ones found on the Yoga C640, which we reviewed earlier. Despite having lighter tactile feedback, both have a similar actuation point. I type a bit faster on the ThinkBook 13s but commit more typos due to the keyboards tactile feedback. One thing that isn’t pleasant on the keyboard is the up and down arrows. The slanted edge between them is supposed to make you more accurate on your desired arrow key press. But doing this introduces a trade-off in the overall key balance of the two keys resulting to both of them being mushy. Lenovo uses a glass trackpad on the ThinkBook 13s. Another omission from the ThinkPad line is the dedicated buttons supposedly positioned on the top side of the trackpad. It uses windows precision trackpad for a better tracking experience. Buttons also feel good with no mushiness even if you’re pressing it midway or on the bottom edge. It seems like almost all Lenovo Laptops sport a privacy shutter. Its grip and slide implementation is better than the C640 thanks to the slightly thicker chassis. Lenovo is one of the few brands left that shy away from a hinged design which not only elevates the keyboard but also hides a portion of the bottom bezel to appear “thin.” The ThinkBook 13s supports up to 180-degrees of tilt which initially poses a concern in terms of the display’s wobbliness. Thankfully, the hinge is strong enough to resist unnecessary wobbling that could further tilt the screen from the user-defined angle. The Display of the ThinkBook 13s uses a 13.3″ 1080p IPS Panel. The screen has a matte finish which can be dark for some people considering the panel only supports up to 300nits of brightness. As far as thin bezels go, only the sides are thin at 5.5milimiters. We used our Spyder X Pro by Datacolor to quantify how good is the ThinkBook 13s’ display. Color Gamut tells us the entire range of colors available on a particular display. Our test shows the display covering 99% of the sRGB spectrum, and 77% of the AdobeRGB spectrum. This translates to the ThinkBook 13s having a good color quality that’s excellent for photo and video editing.  Moreover, calibration is not entirely a must since the target market of the ThinkBook 13s are business-oriented people who mainly look at powerpoint presentations or conference calls. Underneath the Aluminum chassis is the WDC PC SN520 512GB NVMe SSD. Although it uses only 2 PCIe lanes, it reaches its rated read & write speeds of 1,700MB/s and 1,400MB/s, respectively. These speeds are more than enough for executive-level of work. The ThinkBook 13s cooling is sufficient for the i5-8265u powering the system. It’s able to do quick bursts of 3.9Ghz for simple tasks and maintains 3Ghz on heavy loads. Temperatures are also adequate with a peak of 95c and stabilize at 82c when sustaining the 3Ghz clock.

Battery life isn’t the most striking feature of the ThinkBook 13s. Considering that this is an ultrabook and a business-oriented laptop, it’s expected that it should have at least an average of 8 hours. We only managed to get barely 6 hours of the 45Whr battery during our time with the ThinkBook 13s.  Our typical workload involves running Google Chrome with six tabs as our primary application with occasional paint and MS word ALT-TABs. This is with 80% display brightness and using best battery life in power options.

Our time with the ThinkBook 13s has generally been positive until we considered its price. Our review unit’s configuration retails for PHP 58,990 while the Radeon 540X 2GB variant with longer warranty retails for PHP 4,000 less(at Php 54,990) paired with a longer warranty period. Our variant’s Windows 10 Pro Operating System is the only edge it has over the 540X variant. While the difference between Windows 10 Home and Pro can easily be settled depending on the user’s workload, the 540X variant will surely drain the 45Whr battery faster. Based on spec sheet alone, enthusiasts could probably find either a better spec or a cheaper alternative of the ThinkBook 13s. Specs alone aren’t enough to make a user consider this ultrabook. But the ThinkBook 13s offers something that consumer ultrabooks don’t, and that is its premium Business Grade Support. This level of warranty guarantees the ThinkBook 13s’ reliability which puts the business-minded people at ease, allowing them to focus on their business goal without having to worry about its durability.

Specs sheet aside, the ThinkBook 13s is an ultrabook geared towards people who are in for the experience rather than maximizing its performance. That said, the ThinkBooks 13s completes the experience by offering its trifecta of a good display, an above-average keyboard & trackpad, and Lenovo’s Business-Grade Support taken from IBM’s exemplary ThinkPad line. But of course, doing all that in a Mac-Esque style without the ThinkPad’s dated design.

Lenovo Thinkbook 13s Review
Our Verdict
Specs sheet aside, the ThinkBook 13s is an ultrabook geared towards people who are in for the experience rather than maximizing its performance. That said, the ThinkBooks 13s completes the experience by offering its trifecta of a good display, an above-average keyboard & trackpad, and Lenovo's Business-Grade Support taken from IBM's exemplary ThinkPad line. But of course, doing all that in a Mac-Esque style without the ThinkPad's dated design.
Build Quality
9.3
Performance
8.6
Functionality
9
Battery Life
8.1
Price
8.5
What's Good
99% sRGB IPS Display
Business Grade Support
Excellent Speakers
Above Average Keyboard
180-degree support and sturdy hinge
What's Not
4-6 Hours Battery Life
no microSD slot
Mushy up and down arrow keys
Rough Pricing
8.7