Stop right there. Think about the last time you wanted to buy yourself a flagship Zenfone? I have to be honest here. Before the new Zenfone series was announced, the last flagship Zenfone I wanted to really buy was the Zenfone 3. I did not like the Zenfone 4 because it was way off my budget expectations. You probably thought of the same thing too.

2018 came, and the announcement of the new Zenfone series arrived. ASUS bravely ditched announcing a Zenfone during Computex, and decided to take on equally big guns like Samsung and Nokia to announce Zenfone 5. From that time on, I had a renewed hope for Zenfone and told myself to consider getting their flagship, the Zenfone 5z.

A couple of months ago, I almost guessed the prize of the Zenfone 5z during the official launch. I was short by PhP5, but since my guess was closest to the PhP29,995 price tag, I won and received the actual unit after 1 month.

I have been using the Zenfone 5z for more than a month, and having tested all its features, I believe it’s time to give you my full review. Do note that while ASUS is an advertiser of Gadget Pilipinas, we made sure that everything we are covering in this review is based on our empirical tests.

This is a daring and more beautiful Zenfone. It still has its signature concentric circle design, and they managed to achieve that putting the varnish coat under the glass panel.

Despite being covered in glass and built with aerospace-grade aluminum, its overall design looks and feels seamless and smooth. Based on its design, it seemed that ASUS has this obsession to change the way people think about Zenfone as something that’s premium and luxurious. If ASUS was indeed passionate about instilling that thought, then it definitely succeeded in doing so for me. From the 1st to the 4th Zenfone, this is the first time I have ever touched and used one that really feels so premium and luxurious.

The almost bezel-less 6.2-inch all-screen display catches a lot of attention, and it is – in my opinion – the best one I’ve seen. Yes, even better than Huawei P20 Pro; and just as good as the one on Samsung Galaxy S9. Do note that the latter has a Super AMOLED screen, while Zenfone 5z only sports a Super IPS+ screen. Despite this, it managed to perform equally better compared to Galaxy S9, and even way better than OnePlus 6.

The secret behind this lies in its screen technology, color space, and the set color temperature. The right mix of these contributors makes Zenfone 5z’s screen at the top of our list in the same category. It’s vibrant, sharp and the color saturation are near to perfect. It’s just amazing to see that Zenfone is able to achieve this despite having a screen technology not as sophisticated as the Galaxy S9’s.

A performance that can keep up in the competition

The Zenfone 5z is packed with the latest SoC, processors, and hardware bits that you can similarly find in a flagship smartphone. The expectation for this phone to perform just as good or better than its competitors is high, and I am happy to report that the Zenfone 5z proved that it can be among the top of its class.

Specs-wise, particularly its processor and RAM configuration, the Zenfone 5z is almost similar with the unreleased ROG Phone. We’re still waiting for the commercial version of the ROG Phone, but in many ways, its working prototype’s specifications made me liken it to the Zenfone 5z albeit having a discrete and lux design.

While the Zenfone 5z is not positioned for gaming – as it is more geared towards mobile photographers – it performs impressively well when I played PUBG, Real Racing 3 and NBA 2K 18 at maximum settings. With AI Boost on, games performed really smooth but at the cost of high battery drain. During my test, Zenfone 5z gets 10% battery drain when playing high-caliber games for more than 30 minutes.

Surprisingly though, despite playing the aforementioned games, temperature increase was not so high. Increase range between 39ºC to 44ºC when playing games in an airconditioned room (23ºC). This is impressive, and that’s something achieved by a phone without any cooling mechanism installed. ASUS’ Game Genie is still up on Zenfone 5z, and it proved to be a useful way to enjoy mobile games. Budding or seasoned mobile streamers can also take advantage of the API-compatible feature for popular streaming platforms like YouTube and Twitch.

A UI full of Zen and Intelligence

Running on top of Android 8.0 is the latest ZenUI 5.0. It’s a furnished and minimalist version of the ZenUI; and it greatly departs from how it looked like 3 years ago. Finally, the ZenUI is now full of Zen, and it just shows how ASUS really listens to its customers.

A huge chunk of the core improvements on the ZenUI 5.0 is its compatibility with the AI features of Zenfone 5. Actually, ‘AI’ is the single word that embodies the whole upgrade schematic of the new ZenUI. AI Display, Optiflex 3.0, AI Charging, Smart Screen and AI Ringtone. While all these smart features are useful in its own ways, I found Optiflex 3.0 and AI charging the best ones.  The former basically manages memory and resources load when using certain applications and the latter proved to be a useful way of taking care of the phone’s battery life.

Optiflex does the job pretty well of identifying the resources needed by a specific app. This way, the app or game will perform at an optimal state so the battery discharge and heat are not way above the norm. ASUS somehow perfected this, and it is, by far, the best implementation of AI in terms of managing performance resources.

A rear facing camera that I can fight for

Zenfone 5z uses AI to bring about the best settings when taking a particular scene or subject. What it does is it analyzes the subject and cross checks it with its catalog with a plethora of growing samples. Of course, its whole AI camera system operates in a secure environment, and all users are assured that no copy of actual photos is transmitted for cross-referencing purposes.

The phone’s rear-facing camera is its strongest suit. Color accuracy is top notch, and saturation is on point. Default and auto contrast level need a bit of work, which I hope to be remedied via a software patch. The camera performs best when lighting conditions are balanced or lacking. Surprisingly, photos I took when subjects are highly exposed to light look washout at default, but can be fixed by manually adjusting the exposure level.

Here are sample photos we took using the phone using the rear-facing camera. We went to Cosmic Technologies Camera Lab to check the performance of its camera under the hood, and the result was unsurprisingly favorable to ASUS. While result below are mere numbers, the point is that the variance between the ideal result for camera reproduction and sharpness aren’t too far off for Zenfone 5z. B (measured vs ideal) 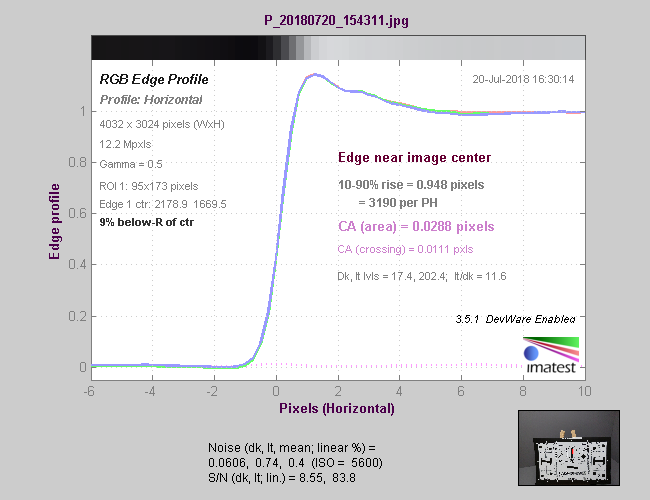 Sadly, ASUS needs to take a look at the default settings of the front-facing camera. I really believe that there’s nothing wrong with the lens and the camera per se. I sincerely think that its mediocre performance can be tweak via a software patch. Photos I took using portrait mode look overly washed out and switching back to normal mode overly saturate and sharpen the subject.

Also, ASUS needs to reconsider fixing Zenmoji as it does not work really quite well.

Here’s a set of photos, which I took using the front-facing camera. A Battery that can last a day!

Battery life of the Zenfone 5z exceeded my expectations, and AI is very likely the main contributory to this. It scales and downscales the needed resources of the phone when needed, and this automated action plays a vital role in managing energy. It yielded 9 hours and 22 mins in battery benchmarks and that’s beyond my expectation. It isn’t as great as the Zenfone 3 Zoom and Zenfone Max Pro M1, but those devices play in a different league.

It’s a great redemption for the Zenfone line. Its strong position in the market plus its very competitive pricing make it one of the best Zenfones, if not the best smartphones, ever released.  There a few issues that ASUS must fix immediately – front facing camera and Zenmoji – these I find these minute ones to boot. How Many Huawei Nova 3i Units Were Sold Just After Launch? Over 20,000!