Before the GTX 1080Ti came out, the GTX 1080 was one of the go to graphics cards for those who wanted the absolute best in performance.

Now, ASUS has launched a refreshed version of the card, sporting a higher memory clock of 11Gbps. So is it worth getting this one over its slightly more expensive brother? Let’s find out in this review. The refreshed Strix 1080 follows the familiar design language of the Strix lineup, sporting the Mayan inspired lines both on the side and the backplate. Like the Strix 1080Ti, this card is noticeable thicker than its less powerful siblings to facilitate better cooling and takes up 2.5 slots worth of space on the motherboard. 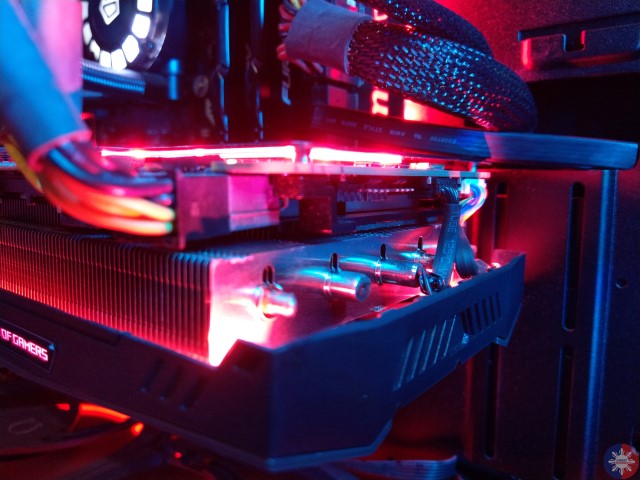 A feature unique with Strix cards, the refreshed Strix 1080 also features two headers to which you can connect your case fans. It also has the signature RGB aesthetics, such as the illuminated ROG logo at the top and on the side, and the lines on the side. Do note though that this card requires both an 8-pin and 6-pin PCI-E connector, so do check your power supply first. The Refreshed Strix 1080 also features ASUS’ patented wing blade fans, which supposedly provides better cooling performance. I do like that they remain silent even when the GPU is under heavy load. The card has 2 HDMI ports, 2 Displayports, and a DVI port, making it great for multi-monitor setups, as well as for use with VR Headsets such as the HTC Vive or the Oculus Rift.

On 3DMark’s Time Spy and Firestrike Ultra, the refreshed Strix 1080 scored consistently well, though with the 1080Ti having a clear lead. In Time Spy, it scored slightly lower than the Strix 1070, though the probable cause is that the 1070 was tested with an i7-7700k CPU compared to the i5-6500 used for the Refreshed Strix 1080.

Before we go into the benchmarks, let’s check out the specs of the rig that we’ll be using:

We tested the refreshed Strix 1080 on a number of games: Battlefield 4, Mirror’s Edge Catalyst, Overwatch, Project Cars, and Playerunknown’s Battlegrounds. Here are our findings: In Battlefield 4, performance was consistently above ideal numbers even at the highest setting. In Project Cars, framerate was satisfactory for most of the time. There were instances of below 60 fps drops, but were hardly noticeable in gameplay. Mirror’s Edge Catalyst is a demanding game, but the refreshed Strix 1080 managed to constantly squeeze out about 60 frames per second even at Hyper setting. Overwatch is a popular FPS game, and the refreshed Strix 1080 cuts it like a knife through butter with excellent framerates even at Epic preset. PUBG is a popular Third Person/First Person Early-Access Battle Royale game. Framerates were decent most of the time, though i did encounter a few drops here and there, most likely due to the game itself which still isn’t fully optimized. Aside from the performance, the other thing that’s good with this card its cooling capability. In all the games we’ve tested, the temperature rarely peaked at above °65 C. Do note that these tests were done in a room with no Air Conditioning.

The ASUS Strix GTX 1080 11Gbps is a monster of a card, and is still a great choice for those who find the Strix 1080Ti to be out of their budget or overkill for their system. It offers good performance consistently across different types of games, and the cooling system manages the temperatures well.

Add the extra features such as being able to connect your case fans, RGB lighting, and Aura Sync, and you have a product that for PhP37,860, offers you just a bit more than what you pay for, and that’s always a good thing.

PawnHero Will Soon Become a Part of Lendr