The Y55 is Vivo’s latest offering in the midrange segment. At a little below PhP 8,000, you get an octa-core processor, 2GB of RAM, 8MP Camera, and a 720p display in a device that looks more expensive than it actually is. But did they get the formula right? Let’s find out in this full review.

The Y55 follows the same design language of its brothers, the V3 and V3 Max. That means a clean white finish in front and metal at the back. It’s really easy to get a good grip on this phone due to its smaller form factor, and what I really love about this design is that it makes the phone look really beautiful, premium while maintaining a simple profile.

Up front, you’ll find the 5.2-inch HD display, the 5 MP front facing camera, and the slew of other sensors. Do note that the Y55 doesn’t have an LED notification light but can use the flashlight as an alternative. At the back of the device is an 8 MP rear shooter with LED flash, and the Vivo branding. 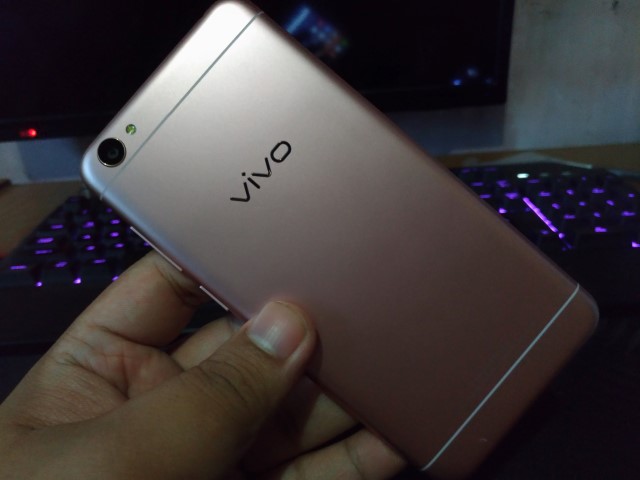 The power button and volume rocker can be found on the right side of the device. The buttons have a good tactile feedback and responsiveness, plus they don’t feel cheap at all. On the left, you’ll find nothing but the SIM card slot, which fits one Micro SIM Card and one Nano SIM Card. One good thing I noticed is that Vivo actually took the liberty of placing a note on which side of the tray should be up. Up top is the 3.5mm headphone jack, and the Micro SD card slot. Finally, at the bottom, you’ll find the microphone, speaker, and MicroUSB port. Overall, The Y55’s design carries a sense of quality that’s not so common for devices in its price range. One that looks good, and actually feels good to use.

The Y55’s 5.2-inch 720p display, unfortunately, isn’t going to be for everyone’s delight. But it still is a good display. Sure, when you look at the screen up close, you’ll notice that some icons aren’t that smooth and appear a bit pixelated, but from optimal distance, you wouldn’t even notice. The screen is very bright and color temperature seems to lean more on the warmer side. Contrast is good and viewing angles are decent too. The Y55 handled daily tasks such as Email, Social Media, watching YouTube videos, and playing music without any major issues. Navigating the UI is also generally smooth. Most apps open fast and switching between running apps is a breeze. There are occasional stutters in some apps but these only happen when the apps are in the process of syncing, and while there were no problems with multitasking, an extra 1GB of RAM would’ve been nice. All is good, except one thing, the absence of an LED notification light. Sure, you can set the flashlight to activate for a couple of seconds when a message arrives, but that’s it. The software doesn’t offer any options to make it blink every 10 seconds or so. It only blinks once, and if you miss that, you have no way of knowing whether somebody called you 5 minutes ago, or if you have a pending friend request in Facebook except to turn on the screen. I can see that some people won’t be bothered by it, but personally, I think it’s a very important element that is a MUST in any smartphone. The Y55 also has a feature called Smart Split 2.0 which allows you to view a text message on half of the screen while using another app on the other half.  There are certain limitations to its use though. The feature is only available for specific apps, and can only be used for text messages, at least for now.

The Y55 handled just about every game I threw at it with no issues. Casual games such a Beat Stomper and DJ Max Technika Q, and even heavy games such as Ashphalt 8 and Unkilled, ran well with no lags whatsoever. Check out actual gameplay below:

The speaker on the Y55 can get really loud, but the sound is evidently distorted at high volume. The treble is just right, and bass is existent, but not overpowering. Ellie Goulding’s Burn was, well a pain to listen to due to the distortion. Put on a pair of good Headphones though and the ballgame changes drastically. There’s a BBE option that when enabled, supposedly improves the sound quality and gives you a few settings that can be tweaked. Default settings were already good enough for me, as highs were very dominant but not piercing (my personal preference). If you love acoustic and vocal tracks, you won’t have to do a lot of tweaking. A higher MP count doesn’t always equate to better photos, and the Y55’s 8MP rear shooter proves that. In good lighting conditions, photos came out detailed with good color reproduction and sharpness. The opposite is true as the amount of light decreases though. As seen with the sample shots, photos come out with a lot of noise in low light. Fortunately, there’s always the handy flash to compensate.

In terms of shooting modes, there isn’t much to choose from, unfortunately. But a Professional mode is available if you want to tweak more elements of your shots like ISO and White Balance.

The 5MP front camera, on the other hand, takes some decent selfies. One of the features of the Y55 is its smart screen flash, which supposedly activates in low light conditions to brighten up your selfies, and it actually works as seen in the sample photos.

The Y55 runs on Funtouch OS 2.6 on top of Android 6.0 Marshmallow out of the box. Which is really good. (I wonder when the V3 and V3 Max will have those updates). As such, a lot of the goodies we’ve come to love from the V3 and V3 Max are present here.

Vivo’s take on Android is different and unique in a lot of ways, which means you’ll have to get used to it, but it does give users a lot of room to customize, and that’s what I personally loved about it. So many elements can be adjusted that it makes the phone more personal. From the home screen animation, gesture controls, visitor mode, which allows you to hide specific content such as photos and messages when someone else uses your phone. It even gives you the option to show your network speed natively. I know, these are little things, but even these little things are all part of the entire experience. The 2650mAh battery actually did great on my test. Playing a video on loop at 50% brightness and 80% volume, the phone was able to achieve 13 hours of on-screen time! That is amazing for a phone that’s this compact with not much room for a big battery. Charging time from 0 to full is around 3 hours which might be a little bit of a hassle to some, but well, i guess you can’t expect everything here right?

There are quite a lot of things to like about the Y55. For just a little less than PhP 8,000, you get a phone that looks and feels premium, has a very capable processing package which handles even heavy games with no issues, has software that provides a ton of customization options, and has excellent battery life. The absence of an LED notification light is a letdown, 2GB of RAM may not be enough for power users, and some features like the Smart Split 2.0, can still be improved. But apart from those, this phone is a solid choice for anyone looking for a budget phone with good performance.