We can’t count how many times we’ve encountered people who firmly believe that there’s only so many ways you can turn a rectangular slab of metal, glass, and plastic, to make it look like a proper smartphone. And honestly, we can hardly blame them. But after a brief period of testing the LG V10, we may have to rethink that idea.

The LG V10 is the new flagship Android phone from LG that marries a peerless, military-grade lightweight body with features that would rival those of most high-end handsets. Off a short list of its main specs, you’ll find at least three different things that make it unique and interesting. To understand exactly what we’re talking about, continue reading our LG V10 review. The LG V10’s body can be described simply as sexy but undeniably sturdy. Its tough chassis is built to withstand falls, and it is mostly due to the leathery battery cover at the back. This back cover is also patterned, which not only looks nice, but also feels good to the touch. And it helps with improving the handset’s grip, too. The back is also home to the now-familiar LG rear power button setup. And this time it includes a very useful fingerprint scanner. It’s easy to use and is reliable for phone security.

Meanwhile, the front of the phone is covered with Gorilla Glass 4. So it has protection at the back as well as the front. This makes it all the more surprising how light the phone is when you grip it in your hand. We believe that the thinness of the phone also factors into it. The display is one of the most interesting aspects of the LG V10. It has a main touchscreen display that measures 5.7-inches diagonally. And there’s also a smaller, secondary screen above the main display, which measures 0.2 inches.

The second screen can be used to see notifications without having to turn on the main display. This screen can also be used for quick and easy access to certain apps, like email, flashlight, and toggling the Wi-Fi connectivity. But while this extra screen is captivating, it’s not the only eye-catching feature on the front of the LG V10. There’s also a dual selfie camera, which is being promoted for its wide angle capabilities. It’s useful for selfies, but when you get right down to it, some higher resolution sensors fare better in terms of image quality. And the lack of a front flash for this camera is a bit disappointing.

Fortunately, the rear camera which serves as the main camera unit isn’t disappointing at all. In fact, it can be used with full manual controls to reach its full potential. In terms of image quality, the rear camera is able to produce fairly noise-free and color-accurate outdoor and indoor photos, even with the simple Auto mode. Using the other camera modes is a cinch, and there are easy photo edit options available with only a few button taps and swipes on the screen.

The rear camera is also quick to capture, which is one of its biggest strengths. Even in other high-end models, Android phones tend to take more than a split second to capture and save images to the internal storage or memory card. Not so with the LG V10, which can definitely be used for quick mobile photography at a moment’s notice.

We’d like to knock the V10 for its large size and lack of a hardware shutter button, but overall, it’s a superb cameraphone. And it’s not a bad multimedia consumption device, either. Owing to the V10’s inbuilt support for 32-bit audio and Hi-Fi digital sounds, you’ll be able to enjoy your favorite music hits right out of the box. Even a pair of budget headphones somehow ends up sounding great when used on the LG V10. The phone has a 3.5mm headphone jack located at the bottom, which is a great plus in terms of usabilty, and it also offers wireless connectivity options for audio, such as Bluetooth.

Connecting the V10 to other devices and expanding its functionality can be done in a number of ways aside from using the headphone port and Bluetooth wireless. The phone also features a micro USB 2.0 port, and you can add to the internal storage with the microSD card slot.

The phone’s soon-to-be obsolete micro USB 2.0 port is the only major hardware bit that we can say we have a problem with. At a time when more and more devices are coming out with the next-gen USB 3-Type C port, seeing the micro USB 2.0 port on the V10 feels like an irredeemable mistake.

A lot of lower-priced, low mid-range phones are even equipped with Type C USB ports. Granted, we might have marked it as a minor flaw if Type C were indeed present on the V10, but for a phone that’s being touted for its being on another level, a non-Type C port is just disappointing.

But speaking of this port, it’s the one used for data transfer and charging the phone’s removable battery. This battery can last well over 1 day of regular use running most of the usual smartphone tasks, but can be drained quite fast with constant use of 4G LTE. Something about the LG V10’s tech specs makes it sound like it doesn’t belong in a body as sleek as the one that it has. For starters, it runs on a speedy Snapdragon 808 SoC, and it packs a whopping 4GB of RAM. Lag is basically non-existent on this phone, but horribly unoptimized apps like Facebook and Snapchat still end up giving it a hard time, despite the various optimizations done by Google on Lollipop.

Using the LG V10 will immediately open your eyes as to what kind of performance Google really wants you to experience out of the Android OS. If you’ve only ever used local phones in the past, of if you’ve used branded phones from other devices makers, but never a real high-end model, the LG V10 will blow your mind.

Whether you want to watch movies in its higher-than-Full HD resolution display, or play Android games while blasting game sounds through the built-in loudspeaker, the V10 will impress you in more ways than one.

During our time spent with the LG V10, we were able to breeze through the Android menu screens without any freeze-ups and all on-screen buttons responded very well to touches no matter what tasks were being done concurrently. The 4GB of RAM really shows itself by, well, not letting you feel any lag at all when multi-tasking. The V10 is pre-loaded with Android 5.1 Lollipop, but a planned software update to Android 6.0 Marshmallow should make its way onto it at some point in the future. Right now, even with the default OS skinned with LG’s favored UI for Android, you’ll find plenty to love and very little to complain about.

The V10 software is presented in much the same way as some other recent LG flagships, and whether you’re an LG loyalist or not, there are a lot of things to appreciate in it. Double-tap to wake is a standard feature as always, and various smart gestures are also supported to make better use of the humungous screen. You can even “shrink” the display if you want to, access multiple recent apps at the same time, and run apps in dual window mode if you’re being geeky.

As a phone, the V10 works even better than it does as an out-and-out smartphone. Meaning, whatever you want to use it for as far as actual communication is concerned, your needs will be meet, and how. The earpiece delivers sound loud and clear, and the mic for voice calls offers amazing clarity. Signal strength was rarely a problem, although the phone’s single SIM card slot might be a deal breaker for some. Meanwhile, internal storage at 64GB is not bad at all. 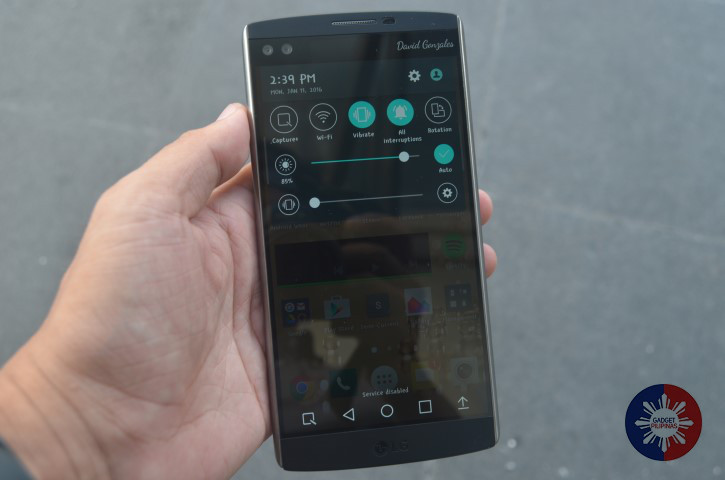 As mentioned earlier, the battery can be long-lasting if you don’t need to rely on 4G LTE data all the time. Because — and this shouldn’t really be surprising at this point — the only real time that the battery can be run down quickly is if you’re constantly connected to a 4G LTE network.

Downloading data in the background, and running a resource heavy app takes a toll on the battery. This can take you from 100% to 80% in less than an hour if you’re not careful. For regular smartphone tasks, such a calling, texting, Web browsing over Wi-Fi, and multimedia playback, the V10 can last more than a full day of heavy use. There may only be a few ways by which you could rearrange the parts of a smartphone to end up with something new and different, but LG really knows how to shake things up. The design of the LG V10 is just stunning. The location of its various hardware bits practical. And the impelentation of its software features thoughtful and simply commendable. If only it were fitted with true high-end specs, then it would truly be perfect. But at least it’s unique and interesting in a good way. Plus, its price easily turns it into a deal that’s way too hard to refuse.