Just how many more Zenfone 2 variants before the 3rd iteration comes out? Hey, I’m not complaining; I am just flabbergasted with number and recency of new variants that the tech giant, ASUS, is coming out almost every month. A couple of days ago, ASUS announced that a special edition of the deluxe version of Zenfone 2 will finally be coming out to the Philippines this January 2016. We got early dibs of the new device, and you can check out our unboxing video and quick comparison to the Zenfone 2 (4gb) and Zenfone 2 Deluxe we have. Check out the video below, or you can simply click this link to watch it directly at YouTube.

Specs-wise, the new variant of the iconic Zenfone 2 is nothing really new compared to the recently launched Zenfone 2 Deluxe. Its RAM is still at 4gb and its internal memory is still a whopping 128gb. This time though, ASUS added a 128gb MicroSD card and changed its side bezel color accent to red. The included 128gb is already installed to the smartphone, but you can easily remove it if you wish you transfer it to a phone that can read and write to such capacity. I must inform you though that I was only to try installing it on my existing ASUS Zenfone 2 Deluxe, but I believe that even the non-Deluxe version will also be able to accept 128gb microSD cards. Apart from the aforementioned changes and bonus above, ASUS also included 2 special back covers – Carbon Night and Drift Silver; plus a pre-installed Asphalt 8 pre-loaded with 25,000 in-game credit. We tried both cases (you can also see the video above to see how the back covers look on the Zenfone 2), and they look fantastic. I, however, find Drift Silver far more attractive than Carbon Night though. While the new cases fit the non-Deluxe and Deluxe versions of Zenfone 2 perfectly, there is no way you can purchase them separately. The special edition still has the PC Grade – Intel 64-bit ATOM Processor Z3590 2.5Ghz – we love. Its combined storage of 256gb is perfect for mobile gamers, content creators, mobile photographers and videographers. Store all the TV series you want and install all the games you wish to play without worrying of running out of storage space. 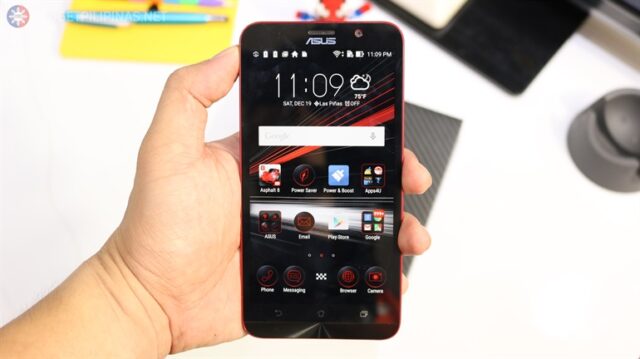 Just like the previous Zenfone 2s (with 4gb RAM), the Special Edition also has 13mp/5mp Pixel Master cameras, which are perfect for mobile photo and video creators. According to ASUS, the Zenfone 2 Deluxe Special Edition will be available this January 2016 for PhP20,995. It’s PhP3,000 pricier than the Deluxe version, but you get great savings from the additional stuff tucked in its retail box – 2 special covers, 128gb MicroSD card and 25,000 in-game Asphalt 8 game credit. While there is no such thing as Zenfone 2 ROG Version, the game is heavily positioned to be perfect for gamers. In that regard, we can’t wait to install as many A-list games on our smartphone and show you games some of our gameplays on our YouTube page.