Last September 24, Disney invited us to the official launch of the 2nd iteration of the hit video game, Disney Infinity 2.0. After the announcement of Marvel’s inclusion to the growing family of Disney Infinity last April 2014, the company – loved by kids and adults alike – had finally launched the much awaited Infinity 2.0. The new game is available on PS4, PS3, Xbox One, Xbox 360 and Wii U.

In case you don’t know what Disney Infinity is – it’s sandbox video game, which allows players to assume the role of different Disney characters – even from different “worlds” – and even go on quests together. I am particularly impressed with Disney’s strategy on this one as the game requires users to purchase play sets, figures and disc packs to add (or collect) more characters in the game. As a dad of two, this could be a means for me to let my kids enjoy the toys… and even play the game.

With the new Disney Infinity 2.0, the Marvel figures and play sets open your world to original storylines in the virtual worlds of some of Marvel’s most popular franchises such as The Avengers, Spider Man and Guardians of the Galaxy. With an original story penned by Brian Michael Bendis, players can expect crossovers among different characters from different storyline provided that playsets and figures are available. 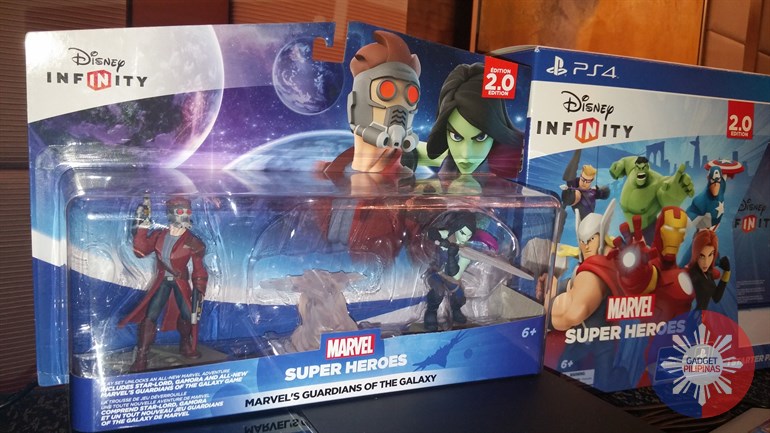 ENHANCED TOY BOX – An all-new Toy Box mode that makes it easier for players to create and share their one-of-a-kind levels and mini-games with family and friends.  Use the new Creator tool to quickly build your worlds faster and easier than ever before.

Shneider even teased us of the new characters they will launch in the pipeline for Infinity 2.0 like characters from Big Hero 6, more villains, Falcon and Jasmine.

The new Infinity will also be a home of new upgrades, mounts, stories, missions, textures, etc., through power discs. The world of Infinity is packed with so many possibilities, provided that you are able to activate them through power discs, which you can purchase for PhP289 per pack.

Since the game has creative play feature through Play Box 2.0, players can create and even share levels and games, which everyone can enjoy. This also brings the game to closer to the hearts of almost everyone who plays Minecraft (creation), Diablo (dungeon crawler) and Plants vs Zombies (tower defense).

I am very excited to play this game soon on our PS4. Once we got our review item, we shall stream our game on our Twitch channel and post some highlights on Youtube. In case you’re into this kind of game, you may buy the Marvel Super Heroes Starter Pack for PhP3,799. If you’re itchy to get the Spider-Man or the Guardians of the Galaxy Play Sets, you may buy one for only PhP1,849.

The Marvel Starter pack contains 3 characters, web code card, an Infinity Base and the game disc. If you wish to add more Avengers characters – for instance, you will have to purchase a character pack for PhP679 a pop. And if you wish to jack up your character (that you can level up to 30 on Infinity 2.0), purchase Power Disc packs for PhP289.