What you’re seeing below is one of the best looking smartphones we have ever used since Idol Ultra and Blackberry Q10. True to Asus’ tagline for their Zenfone line, the Taiwan-based company truly put mobility in style as the core design philosophy of Zenfone 5.

When I unboxed and turned on the Zenfone 5 for the first time, I realized that Asus had invested so much to first highlight the experience of having a Zenfone rather than to boast its impressive hardware specs. Let me show you some of the unboxing pictures:

Zenfone 5 is, foremost, a work of art. It’s obvious that Asus put much effort in attention to detail when they designed this product. Each side of the phone invokes experiences that most smartphones seem to lack.

Its design is based on Zenbook’s design. 4 out of 5 people who saw this phone immediately noticed the iconic concentric circle finish just below the 3 capacitive buttons. It was done using precise CNC milling with 45° diamond cuts at a 0.13mm pitch. If you’ve got long nails, you can literally grind down and shape your nail with it. Zenfone 5’s interchangeable back panel is anodized and has a rubbery feel. In my opinion, the material does not just look good, but it also provides additional grip and comfort. 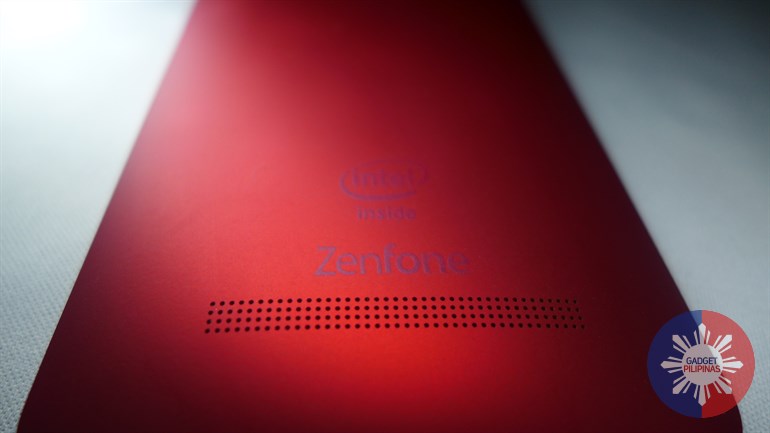 The phone’s minimalist design give both left and right sides of the phone a very sleek look. The volume rockers on its right side employ the same Zenbook finish. Microphones are located on top and bottom sides of the phone. Charging port or micro-USB slot is located at the bottom, while the 3.5mm headphone jack can been on top the of the phone. Enough about the aesthetics department. Let’s talk about the phone’s performance.

There are 3 important things that I would like to cover – responsiveness, apps and gaming and camera. I thought that these three things would give you a firm and practical grasp how well this phone performs.

It isn’t 100% lag free, but its level of responsiveness is unlike other devices at similar price point and specs. Swiping across the screen to navigate menus and content is very fluid, thus the zen-moniker. I find it really fast, which is definitely a plus-point given its dual-core processor.

The phone is powered by a dual-core 1.6Ghz Intel Atom CPU Z2560 processor. The said processor is said to be very power-efficient and fast. Other devices that has this SOC are Asus Memo Pad FHD 10, Samsung Galaxy Tab 3 10.1-inch, Dell Venue 7, and Geeksphone Revolution.

We have received comments that Zenfone 5’s battery, apparently, runs out too fast. Such comments basically put its processor to negative light. So, I tested it fully and had the following results: The performance of Zenfone 5 can normally can be found on high-caliber and premium smartphones. In Zenfone 5’s case, it is attributed to the combined superiority of Intel’s technology (with PowerVR SGX544 MP2 GPU), 1GB RAM and ultra-speed 64-bit memory. Yes, in case you want to know, the phone has 64-bit memory with frequency of 1066MHz (2x2gb LPDDR2, at 1066MHz). You will appreciate how this affects the phone’s performance when I move to discussing about apps and games.

My favorite apps like Over, Add Watermark, iZurvive, PicSayPro, Steam and Twitch open quickly; and games like Rayman Jungle, Card Wars, Monopoly Millionaire and Real Box play very smoothly. I need to inform you though that Gangstar Vegas, a GTA-clone by Gameloft, fired up too slow and even crashed at first boot. Definitely “forgivable” on my book though.

If you are into performance benchmarks, Zenfone 5 got the following scores:

The benchmark results presented here aim to provide sufficient information on how Zenfone 5 performs tasks. Such results however are only meant for information purposes, and should not be taken solely as the only reference to purchase a product.

The nifty and highly intuitive ZenUI easily put the Zenfone up on a pedestal of simplicity without sacrificing functionality. I particularly like its “What’s Next” feature, which basically shows – well – what’s next on your calendar and tasks in a highly readable and “layman” format.  What’s even more interesting are the additional apps, which Asus preloaded on the device. These are actually pre-loaded softwares, but I don’t want to categorically lump them into the “bloatware” category, because (1) the apps don’t consume a lot of storage; and (2) the apps put me in control of the device. These apps include:

Finally, let me focus on its camera. Obviously, as seen on the photos below, Zenfone 5’s Pixelmaster technology comes to play to take good photos even in low light. Armed with an 8-megapixel Sony BSI sensor, f/2.0 aperture, 5 element lens and effective image stabilization, Zenfone 5’s can go toe-to-toe with the iPhone 5s or even the LG G Pro 2.

Check out a sample photo below. I used its camera to take a picture of a subject in low light condition. I took the photo on the left in Auto Mode and without flash; I took the photo on the right in low light mode. You will notice that the latter photo shows more light, but minutely sacrificed quality. It isn’t so bad at all though because the amount of noise on the photo is barely visible. Zooming into the subject is a different story, obviously, but it still the best when it comes to sucking more light without sacrificing too much quality.

Here’s another set with flash enabled at Auto Mode and Low Light Mode.

Zenfone 5 offers numerous photos and video preset that I definitely enjoyed using. Apart from Lowlight and Auto Mode, there are also Time Rewind, Panorama, Night, Depth of Field, Smart remove, All Smiles, Beautification and GIF Animation Modes. This saves you from the hassle of looking and downloading for a 3rd party camera app, because almost everything you need is already built in to the system. And oh, there is even Time Lapse mode on video, which basically does what Instagram’s Hyperlapse can.

Here are sample videos for your reference.

Zenfone 5 is undeniably the phone to beat especially when it comes to value for money. It has everything you need, which are normally found in high-end premium smartphones, without spending too much. It’s made by Asus, a brand known for quality and customer service excellence. This is the phone that I’ll never get tired recommending to people who have very tight budget.