A new player has entered the mobile phone scene in the Philippines – Gionee Smartphones. You probably have not heard of Gionee before but they are pretty prominent in China. Unlike some of the local mobile phone companies in the Philippines, Gionee isn’t actually a company that rebrands phones. They are actually the ones manufacturing the phones, from mobile device designing, R&D, manufacturing, and sales in international markets, and offering mobile internet application services.

I had the privilege of talking to the official distributor of Gionee Smartphones in the Philippines a month ago; they even gave me a glimpse of the phones that they are planning to launch. Sure you can see all of their phones in their official website, but you would agree with me that nothing beats the experience of holding and toying the phones with your hands.

One of the phones they launched last February 15 in the Philippines is the Ctrl V3, or simply CV3. Some people in China even call this as Control Victory, but I thought that it’s too flamboyant to say. Earlier, they gave me one to show you guys how it looks, how it fares and how it could compete in the market where dual-core phones are less than PhP5,000. The retail box is all paper but has a glossy finish. The picture of the phone infront of the box was neatly printed and the specifications (list) at the back is very readable.

The CV3 is a slate device, so expect this to look like most of the Android smartphones you know. In fact, the device reminds me of the Cherry Mobile Flare although I find the CV3 classier and more robust.

The phone has a dimension of 130mm (height) and 67mm (width). For comparison purposes, the phone is 5% longer and 12% wider than the iPhone 5. The slightly ridged back panel makes it nonslippery, very comfortable to hold and resistant to smudge. The screen though is quite the opposite as it attracts smudge and finger prints. 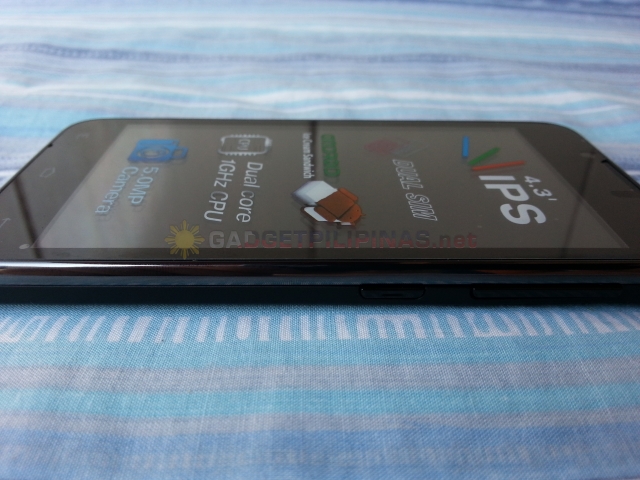 Bottom side: NTSH (Nothing to see here) Left side: NTSHT (nothing to see here too)

As previously stated, it has a 4.3 inches scratch-resistant IPS WVGA screen with One Glass Solution (OGS Technology), which make the phone slimmer, quicker, clearer and lighter. That OGS sounds too technical but in my experience, the CV3 has indeed impressive viewing angle. This is technically one of the differentiating factor of the CV3 and some of the phones Gionee will introduce in the future.

The phone is pre-installed with Android Ice Cream Sandwich. Sitting on top of the OS is a UI or skin that Gionee interface. It isn’t as heavily customized compared to HTC Sense and Sony Timescape but Gionee did a good job in pre-installing a tool that lets me make my own theme via Theme Skin. There are lots of things I’d like to tell you guys but it’s best to do that “personally”. Yes “personally” by watching us at the Big Time Show tomorrow night – March 2, 10pm – as we talk about Gionee and the Gionee CTRL V3.

To spice things up and to make our discussion more interactive tomorrow night, shoot your comments and requests on what you would like us tackle about the CV3 below.