The official website of Banko Sentral ng Pilipinas has recently been hacked by Anonymous Philippines.

According to what’s written on the defaced BSP Website, Anonymous Philippines clamors for the Filipino’s right to Freedom of Expression.

The Philippine Government has just passed a bill that effectively ends the Freedom of Expression in the Philippines.

The Cybercrime Prevention Act of 2012 is the most notorious act ever witnessed in the cyber-history of the Philippines, and the language of the bill is cunningly designed to make you think it only applies to individuals who are deep in cyber-technology and doesn’t apply to everyone, but some part of the bill basically says it can imprison anyone who commits libel either by written messages, comments, blogs, or posts in sites such as Facebook, Twitter, or any other
comment-spaces of other social media in the Internet.

New technologies give us new opportunities to connect with a lot of people not only in this country but all over the world. They can also provide us with a medium through which our political, public and even private views can have an immediate and direct impact on individuals, communities and even countries. It is just so disappointing that our government, in adopting our 80-year-old antiquated libel laws to the Cybercrime Law, again seems to have retarded our march with the rest of the world with respect to giving full force to the people’s freedom of expression.

We ask for a revision of the said bill for the betterment of the Filipino denizens.

Protect our Right to Freedom of Expression! 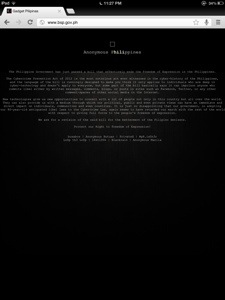 What can you say about this everyone? Is Anonymous Philippines’ cause for defacing BSP’s website a justified act since they are fighting for something very important? Or, it’s something that should not have been done because the website contains public interest and may post insecurity among the internal and external customers of BSP.

Gadget Pilipinas’ web page was also defaced in August 2012 because of security concerns. The hacker taught us a lot and until today, we genuinely thank them for helping us identify our website’s security fiasco. They could have probably informed us in a different and a more pleasant manner though.

iPhone 5 Will Be Available in the Philippines via Widget City

House of Vera Is Now An Official Partner of Gadget Pilipinas